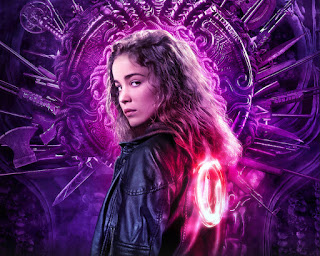 Caught in the middle of an ancient war between good and evil, a young girl wakes up in a morgue with inexplicable powers. Her search for answers brings her to The Order of the Cruciform Sword, a secret society of warrior nuns sworn to protect the world from evil. While juggling her responsibilities as the chosen one with the normal obstacles of a teenage girl, this mysterious fantasy drama is full of mystery, action, adventure, and teenage romance, proving our main character might fight in the name of good, but she’s no angel.
[Source: SFGate] Now we know who will don the habit for Netflix’s “Warrior Nun,” the upcoming series based on the comic book first published by San Antonio’s Antarctic Press.

Portuguese actress Alba Baptista will lead as Ava, the 19-year-old title hero who wakes up in a morgue with a holy artifact embedded in her back and a holy mission to kick demon butt, as both heaven and hell vie for her abilities.

According to Deadline Hollywood, the “Warrior Nun” cast also includes Toya Turner as Shotgun Mary, a loyal but rebellious member of the sisterhood; Tristan Ulloa as Father Vincent, the flawed leader of the Order of the Cruciform Sword; and Thekla Reuten as Jillian Salvius, a tech CEO challenging the Vatican’s power.
Rounding out the cast are Kristina Tonteri-Young as Young Sister Beatrice, a quiet Sister Warrior; Lorena Andrea as Sister Lilith, a legacy nun from an elite family; and Emilio Sakraya as JC, the ambitious leader of some petty crooks.
Antarctic Press founder Ben Dunn created the super sister with a sword, which he brought to life in 1994 with the limited series “Warrior Nun Areala.”

Dunn wrote and illustrated the comic about Sister Shannon Masters, a noble nun who assumes the mantle of a powerful Valkyrie who launched a hard-fighting holy order. Dunn later sold the rights to the “Warrior Nun” name and character to Avatar Press.

Netflix has announced a release date for “Warrior Nun.” The series will have 10 episodes available on July 2, 2020. Simon Berry is the series creator, showrunner and executive producer, with Dunn as a story consultant.
▶ Watch the Trailer
Posted by anim8trix at 12:00 AM