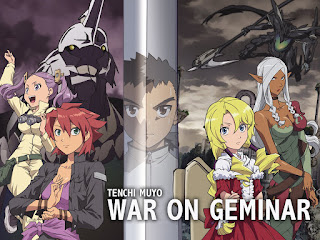 Tenchi Muyo! War on Geminar
Kenshi Masaki is a 15-year-old boy that has unwillingly traveled from his home on Earth to the alternate world of Geminar (ジェミナー, Jeminā). On Geminar, the countries wage wars using Sacred Mechanoids, humanoid exoskeletal weapons that were originally discovered within ancient ruins and developed over centuries. After being tricked by a mysterious organization into participating in an attempt to assassinate Lashara Earth XXVIII, the young ruler of the Shtrayu Empire, he ends up captured after he chooses not to kill her. Deducing enough about Kenshi to interest her and because his abilities make him an extremely valuable property, Lashara decides to take Kenshi under her protection. 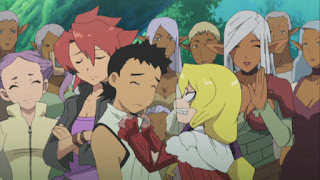 Disguised as her attendant, Kenshi travels with her and her bodyguard Chiaia Flann to the Holy Land, a virtually impregnable fortress that serves as an academy to train Sacred Mechanoid pilots, most of whom are female. With his kindness, tenacity, and skills that vary from carpentry and cooking to advanced survival techniques, Kenshi eventually becomes a celebrity in the academy, becoming the object of affection of many female students and making some of the male students envious. However, the same organization who deceived Kenshi is secretly working inside and against the academy, and a worldwide conflict is about to begin.
▶ Watch the Entire Series
Posted by anim8trix at 12:00 AM