The Liberator takes place during World War II where maverick U.S. Army officer Felix Sparks and the 157th Infantry Regiment fought for over five hundred days alongside the Allied forces during the Italian campaign. The Liberator is a character-driven action miniseries based on the true story of World War II infantry commander Felix "Shotgun" Sparks (played by Bradley James), who led the members of the 157th Infantry Battalion of the 45th Infantry Division, an integrated group of white cowboys, Mexican Americans and Native soldiers drawn from across the west. Sparks and his battalion of "Thunderbirds" were classic citizen soldiers, and for over 500 days they led a special group of American soldiers from Italy to France to the liberation of the Dachau concentration camp, through some of the most grueling battles of the war, becoming one of the most decorated American combat units of World War II.
▶ Watch the Trailer 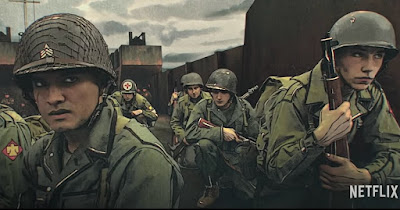