Gunpowder Milkshake
In a flashback at a diner, 12-year-old Sam learns that her assassin mother, Scarlet, is skipping town after a job gone wrong. Armed men arrive to kill Scarlet, but she kills them and escapes, leaving an upset Sam behind. 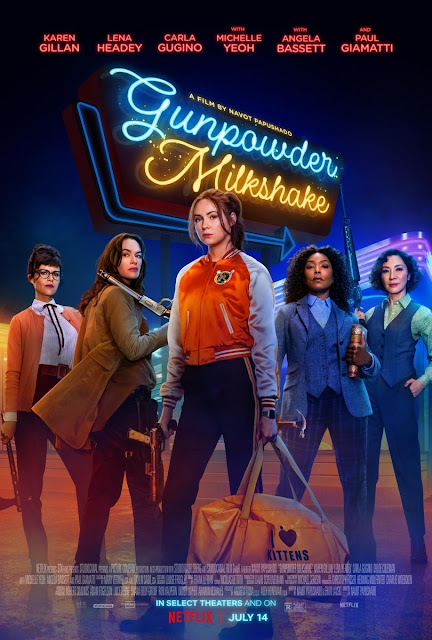 ▶ Watch the Trailer
Fifteen years later, Sam works as an assassin for Nathan, HR for the same firm Scarlet worked for. Nathan gives Sam a new job, killing a man who stole money from The Firm and returning the money. Sam goes to a weapons armory disguised as a library to exchange her weapons for new ones. There, she meets Anna May, Madeline, and Florence - three former accomplices of Scarlet. They consider killing her for showing up unannounced, but change their minds when they learn her identity. They provide her with clean weapons for the job.

Sam infiltrates a hotel room to retrieve the stolen money and shoots the man responsible in the abdomen when he lunges for his ringing phone. Listening in on the call, it is revealed he stole the money to save his kidnapped young daughter and is to bring it to a nearby bowling alley to exchange for her. Sam takes him to a firm-affiliated private doctor for treatment and agrees to handle the exchange herself. Nathan learns of her plan and sends three henchmen to stop her and retrieve the money; Sam deals with them before continuing with her plan. Masked men give her the girl, Emily, before retreating with the money; Sam pursues them, but the men turn on one another, resulting in their deaths and the destruction of the stolen money.

Meanwhile, Nathan learns that one of the henchmen Sam killed in an earlier job was the son of Jim McAlister, the head of a powerful criminal empire. To avoid conflict, Nathan gives up Sam's information and location to be killed. Sam returns to the doctor to reunite Emily with her father, but they learn that he did not survive. Nathan's three henchmen are also at the doctor seeking treatment for their prior fight and they receive orders to kill her. The doctor injects Sam with a serum that renders her arms useless. Sam asks Emily to tape a knife and a gun to her hands and she uses them to fight and kill the three henchmen. More henchmen arrive, but Sam and Emily escape in Sam's car, with Emily steering and Sam working the pedals.

Sam receives a text from Nathan, giving her the address to a safe house where she can find supplies to help her escape. She and Emily travel there and run into Scarlet, who reveals she has been watching Sam from afar all these years. When henchmen arrive to kill Sam, Scarlet guides them through a hidden escape route. They manage to escape and return to the library, where the librarians angrily demand why Scarlet never tried to contact them when she disappeared. They are interrupted by arriving gunmen. Sam attempts to hold them off, but, after she is overpowered, Scarlet intervenes to save her. The librarians consider fleeing with Emily, but they decide to join the fight.

All the gunmen are killed except for Virgil, Jim McAlister's nephew, who kills Madeline and kidnaps Emily. Virgil calls Sam, who offers to turn herself in at the diner in exchange for Emily's freedom. Sam arrives to meet Jim McAlister who explains that his late son had four older sisters that Jim could not relate to as he does not understand women. Jim intends to torture Sam and make Emily watch, but Scarlet, Anna May, and Florence arrive with guns to free them. And all Hell breaks loose... again!
Posted by anim8trix at 12:00 AM