The D&D Series Arrives on Amazon in Early 2022 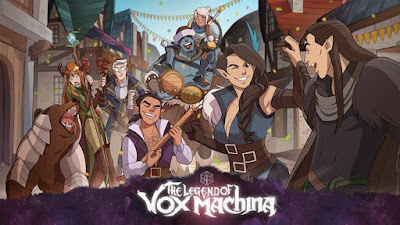 The Legend of Vox Machina
This American adult animated fantasy series is set in Exandria, a fictional world created by Matthew Mercer in 2012 for his personal Dungeons & Dragons campaign which then launched as the actual play web series Critical Role in 2015. Most of the story takes place on the continent of Tal'Dorei in locations such as the metropolis of Emon and the city-state of Whitestone.
▶ Watch the Trailer
The first two episodes of series "will be an all-new story about the seven-member Vox Machina team at D&D Level 7 on their first 'grown-up' mission, which occurs prior to Critical Role’s first RPG show". The series will then adapt the Briarwood arc from the original web series, "in which the Vox Machina crew avenge the murder of the rulers of the town of Whitestone and most of their offspring by the evil Lord and Lady Briarwood". The series will also adapt "other classic Vox Machina story arcs".
Amazon Series Premiere on February 22, 2022
Posted by anim8trix at 12:00 AM