The Fall of Empire is Coming... 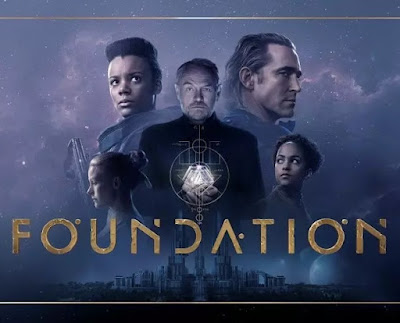 F O U N D A T I O N
A complex saga of humans scattered on planets throughout the galaxy all living under the rule of the Galactic Empire.
Season Finale is November 19, 2021
Season 1 of Foundation, the global phenomenon eight decades in the making, is coming to an end. Catch up on Foundation before the finale https://apple.co/_Foundation
Renewed by Apple TV for Season 2
Based on the award-winning novels by Isaac Asimov, Foundation chronicles a band of exiles on their monumental journey to save humanity and rebuild civilization amid the fall of the Galactic Empire. Foundation stars SAG Award winner and Emmy Award nominee Jared Harris as Dr. Hari Seldon; Emmy Award nominee Lee Pace as Brother Day; Lou Llobell as Gaal Dornick; Leah Harvey as Salvor Hardin; Laura Birn as Demerzel; Terrence Mann as Brother Dusk; Cassian Bilton as Brother Dawn; and Alfred Enoch as Raych.
Led by showrunner and executive producer David S. Goyer, Foundation is produced for Apple by Skydance Television with Robyn Asimov, Josh Friedman, Cameron Welsh, David Ellison, Dana Goldberg and Marcy Ross also serving as executive producers.
▶ Watch the Extended Season Finale Trailer
Posted by anim8trix at 12:00 AM