New Buck Rogers to get the Iron Man treatment 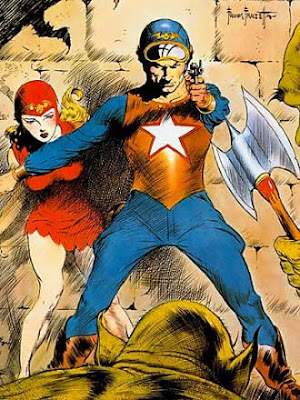 Resident Evil director Paul W.S. Anderson next takes on the classic sci-fi franchise Buck Rogers, and he told reporters at WonderCon that he's going back to the original concept—a man thrust 500 years into the future (in this case, the 26th century)—with the help of the guys who put the spark in Tony Stark.
Screenwriters Art Markum and Matt Holloway are working on a Buck Rogers script, and that's a good sign: They worked on the script to the first Iron Man movie, so they've done well by comics before.
The writers have hashed out a storyline going back to the original concept. "You take a relatable modern-day man, you put him in the far-flung future," Anderson told a group of reporters in San Francisco on Saturday, where he was promoting Resident Evil: Afterlife. "I think what Markum and Holloway will do—which they did with Iron Man—which is bring a lot of kind of humanity and character to the story. So I think they're going to write a great Buck character in the way that they wrote a great Tony Stark character."
"I always start with a love of the source material," Anderson said. "That's the thing all of those things have in common. I love Aliens and Predators. I used to play and love Mortal Kombat. I love Resident Evil. I love Buck Rogers. I read the comic strips as a kid, the old comic strips. I watched the TV show. I love the source material, and then I take that love and knowledge of the source material and then try and put my own spin on it."
Anderson added: "In the case of Buck Rogers, I'm going to have the help of Markum and Holloway, who wrote the original Iron Man [and] who are terrific writers. It's not just going to be me. They're going to be bolstering my visual vision of what Buck should be with, I think, some tremendous character work." [Source: SciFi.com]
Posted by anim8trix at 6:24 AM

Email ThisBlogThis!Share to TwitterShare to FacebookShare to Pinterest
Labels: live-action