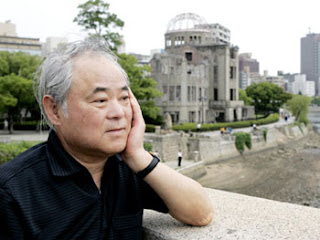 Spanning generations: Keiji Nakazawa, author of "Hadashi no Gen" ("Barefoot Gen"), takes in the
view from Hiroshima's Aioibashi Bridge, where he played as a boy, in June 2008. KYODO
Keiji Nakazawa was born in Hiroshima and was in the city when it was destroyed by an atomic bomb in 1945. All of his family members who had not evacuated died as a result of the explosion after they became trapped under the debris of their house, except for his mother, as well as an infant sister who died several weeks afterward. In 1961, Nakazawa moved to Tokyo to become a full-time cartoonist, and produced short pieces for manga anthologies such as Shōnen Gaho, Shōnen King, and Bokura.


Following the death of his mother in 1966, Nakazawa returned to his memories of the destruction of Hiroshima and began to express them in his stories. Kuroi Ame ni Utarete (Struck by Black Rain), the first of a series of five books, was a fictional story of Hiroshima survivors involved in the postwar black market. Nakazawa chose to portray his own experience directly in the 1972 story Ore wa Mita, published in Monthly Shōnen Jump. The story was translated into English and published as a one-shot comic book by Educomics as I Saw It.

Immediately after completing I Saw It, Nakazawa began his major work, Hadashi no Gen (Barefoot Gen). This series, which eventually filled ten volumes, was based on the same events as I Saw It but fictionalized, with the young Gen as a stand-in for the author. Barefoot Gen depicted the bombing and its aftermath in graphic detail, with Gen's experiences being even more harrowing than Nakazawa's own. It also turned a critical eye on the militarization of Japanese society during World War II and on the sometimes abusive dynamics of the traditional family. Barefoot Gen was adapted into two animated films and a live action TV drama.

Nakazawa announced his retirement in September 2009, citing deteriorating diabetes and cataract conditions. He cancelled plans for a Barefoot Gen sequel. In September 2010, Nakazawa was diagnosed with lung cancer and in July 2011, metastasis from lung cancer was found. He died on December 19 2012. 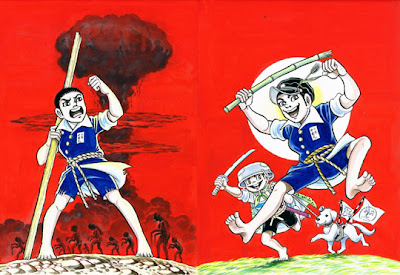 Mightier than the sword: An original scene for a picture book version of the comic
series "Hadashi no Gen" ("Barefoot Gen") owned by the Hiroshima Peace
Memorial Museum is shown in this illustration. HIROSHIMA CITY / KYODO 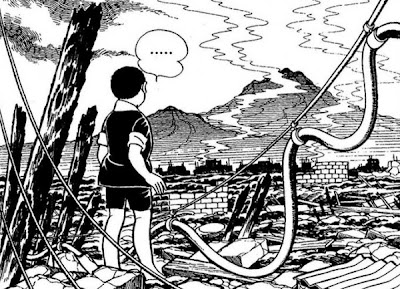