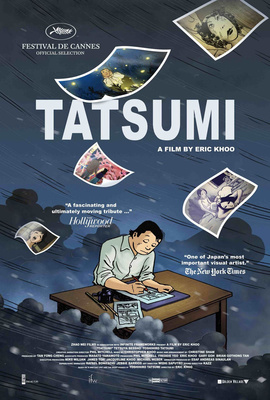 A tribute to an artist who sought to make comics cinematic, Eric Khoo's animated feature TATSUMI brings the manga legend classic stories to the big screen for the first time. The North American independent label KimStim has confirmed that it will release Eric Khoo's Tatsumi film on DVD. The company will release the film on March 26 for US$29.99. The film will include the Japanese language track with English subtitles. Khoo's animated film adaptation of Yoshihiro Tatsumi's A Drifting Life autobiographical manga retells the namesake creator's struggle to make a living after World War II. Tatsumi and others began challenging normal standards of manga drawing by pioneering a nontraditional gekiga style of storytelling and art design. The film previously screened at France's Cannes film festival in the Un Certain Regard category, won the Best Animated Film award at Spain's Sitges International Fantastic Film Festival and the best film award at the Dubai International Film Festiva, and received special mention in the Winds of Asia-Middle East category at the Tokyo International Film Festival in 2011. Singapore submitted the film for consideration in the foreign-language film category for the 84th annual Academy Awards, but the film was not nominated. A Drifting Life originally shipped in Japan in November of 2008 as a two-volume series. The Canadian comic book publisher Drawn and Quarterly picked up the North American license and released the manga as a single, 840-page volume in April 2009. The manga since won two Eisner awards in 2010. Tatsumi himself was also nominated to enter the Eisner Hall of Fame that year, but was not selected. The film is currently screening in Toronto until January 25, and will also screen at the Videology theater in Brooklyn on January 26.