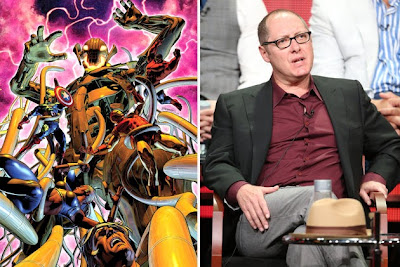 Good news for James Spader – the quirky character actor is coming back in a big way as one of Marvel's ultimate villains.

Spader has just landed the title role in "The Avengers 2: The Age of Ultron," the upcoming sequel to 2012's record-setting superhero jamboree.

Ultron is an evil robot that can travel through time and uses his talents to change the present so he can have the upper hand in the future.


But, departing from the comic, writer-director Joss Whedon plans to strip some of Ultron's powers for the upcoming film. "I knew right away what I wanted to do with him," Whedon recently told Entertainment Weekly. "He's always trying to destroy the Avengers, godd--- it, he’s got a bee in his bonnet. He's not a happy guy, which means he’s an interesting guy. He’s got pain. And the way that manifests is not going to be standard robot stuff. So we’ll take away some of those powers because at some point everybody becomes magic."

Spader's Ultron will be making trouble for Marvel's costumed heroes in the movie, including Iron Man, The Hulk, Captain America, and Thor. However, since Ultron is entirely mechanical, it remains to be seen if Spader will be on set in a suit, interacting with his fellow cast members, or if he'll be providing the voice for a CGI creation. So far, Marvel and Disney haven't weighed in on the matter.

Whedon first revealed that Ultron would be the main villain in the "Avengers" sequel during his appearance at San Diego Comic-Con in July. And that Spader will be playing a less powerful Ultron, this should give fans plenty of room to speculate on how the writer-director will approach the character, given Spader's ability to play bad guys who are at once charming and a little creepy.

After rising to fame as a Brat Packer in 1986's "Pretty In Pink" and 1987's "Less Than Zero" (where he played opposite his new nemesis, Iron Man Robert Downey Jr.), Spader wowed critics in the 1989 independent drama "Sex, Lies and Videotape," and developed a reputation for nailing offbeat roles, such as a man obsessed with car wrecks in 1996's "Crash" and the kinky businessman in 2002's "Secretary."

After a long run on the TV series "Boston Legal," Spader seemed to stumble as Robert California, the obtuse idea man who took over for Michael Scott on "The Office" (he was one of the few characters from the series who didn't pop in for the show's grand finale). But Spader impressed audiences and critics last year with a showy role in Steven Spielberg's "Lincoln," and with a new TV series, "The Blacklist," debuting in September.

With "The Avengers 2: The Age of Ultron" on the horizon, it seems safe to say that James Spader is making a late-in-his-career comeback.