Paul Walker of Fast and Furious Dies at Age 40 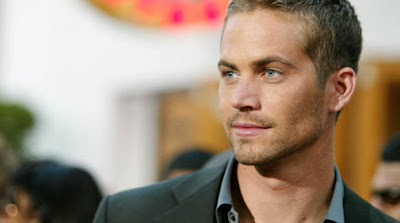 Paul Walker
(1973 - 2013)
"Star of The Fast and The Furious"
Paul William Walker IV (born September 12, 1973) is an American actor. He became well known in 1999 after his role in the hit film Varsity Blues. However, he is perhaps best known for starring as Brian O'Conner in The Fast and The Furious movies.
To movie-goers, Paul Walker was the sexy “Fast and Furious” FBI agent who infiltrated the local street racing scene and never let go.

Off screen, the 40-year-old actor who died Saturday in a fiery car crash loved fast cars just as much as his alter-ego but lived a quiet, philanthropic life centered around his 15-year-old daughter who moved in with him this year.
In an interview with KNBC on Monday, Walker's heart-broken father said Paul was "the most courageous" of his sons, even as a child. He once stood up for a small boy who was being bullied by "a big husky guy."

“Paul never thought anybody was beneath him," Paul William Walker III said. "When he hugged me it was like this is a special, special thing. He had this way, this bounce, the way he walked, I always kidded him about the way he walked.”

On Monday morning, the Los Angeles Sheriff’s Office told NBC News that investigators were still piecing together the cause of the accident. The autopsies on the remains were put "on hold" Monday, as the Los Angeles Medical Examiner's Office waits for dental X-rays for each man to make the official identifications said Craig Harvey, chief of the coroner's operations bureau.

Walker died while attending a charity event for Reach Out Worldwide, an organization he founded after he volunteered in Haiti in 2010, following the island’s devastating earthquakes, and witnessed first-hand the lack of resources needed to deal with natural disasters. The car show and toy drive event was held at Walker’s automotive shop Always Evolving in Valencia, just north of Los Angeles, with proceeds earmarked for families affected by the typhoon in the Philippines and a tornado in Indiana.

"Paul wasn't someone who would just write a check and lend his name to an organization; he was the heart and soul of Reach Out Worldwide,” JD Dorfman, who worked at Reach Out Worldwide, told Christian Today. “Paul was the first one in and the last one out; he led by example and his hard work and dedication inspired everyone who had the privilege of working with him.”

According to Dorfman, Walker led one of the first teams into the hardest hit areas of Haiti and later traveled to Chile to take water and medical aid after the earthquake and tsunami there. He also cleared debris and helped people move back into their homes after the tornadoes in Alabama.

“Paul was an honorable, hardworking, dedicated, respectful man with a humble spirit who shared his blessings with those who needed it most,” Dorfman said. “It was an honor and a privilege to be able to work with, learn and look up to someone who walked the walk."

A friend of Walker’s who attended the car show event on Saturday told E! that the organization meant “everything” to the actor and he put "everything he could" into his charity.

"He had been so happy," Townsend said. "He was there at the event and had managed to raise thousands and so many people had brought toys. “So many people had come out to support the charity and he was with his friends. It was a great day for him. He was so overwhelmed to have so much support."

Walker went for a ride in a red limited-edition Porsche Carrera GT with his friend and chief executive officer of Always Evolving Roger Rodas when the accident happened. Walker was in the passenger seat, and speed may have been a factor, the Los Angeles Sheriff’s Office said. The car knocked over a tree and a concrete lamppost. About 20 witnesses told police they tried to extinguish the fire to remove the two men from the burning vehicle but they were unsuccessful. By the time, the Sheriff's office arrived on the scene, the car was engulfed, police said.

"[My son] tried to extinguish the car," said Jim Torp, who attended the event and heard the crash, in an interview with "Access Hollywood." "It was a small flame when he got there. He put the fire extinguisher on, and then the car blew up. Within split seconds, I was trying to get other people from A&E up there to help. Everybody thought it was a special effects explosion, because there's a special effects place right behind the studio."

Walker’s daughter, Meadow was also at the car show to support her father. The 15-year-old moved in with her father full-time this year, after growing up in Hawaii with her mother. The actor told Entertainment Weekly in March that his daughter had given him a new sense of home.

“My heart was desperate for so many years with the situation with my daughter,” he said. “She’s living in Hawaii and she’s there and I’m running here. My daughter lives with me full time now and she’s the best partner I’ve ever had. It’s so nuts. I’ve never had anything like this in my life. I’ve been so transient, I’ve been on my own since I was 16. I didn’t even have my own place until I was 32 years old. I literally lived out of bags for 16-plus years.”

Walker dated Meadow's mother, Rebecca McBrain, when he was in his mid-20s, but the actor has said he wasn't mature enough to get married, according to People magazine.  Although she lived in Hawaii, McBrain and Walker shared custody and Meadow often visited her father on the sets of his movies, Walker taught her to surf.

Meadow Walker posted a tribute to father on Facebook Sunday: "When I was little he taught me to walk, taught me to smile, and taught me to never give up. I loved him even before I knew what love was. He was my hero. My REAL life hero! He will always be in my heart. It brings tears in my eyes as I write this. You’re gone, but not forgotten. R.I.P Dad!"
Posted by anim8trix at 12:00 AM