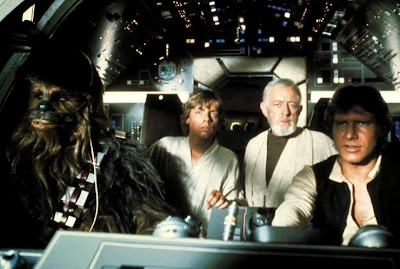 [Source: blastr.com] According to the U.K. site of Yahoo Movies, Han Solo's battered yet indestructible Millennium Falcon has still "got it where it counts" and will appear in the new J.J. Abrams-directed film, which begins shooting at England's Pinewood Studios in early 2014.

A source revealed, "A full-scale 1:1 Millennium Falcon has been built, as well as the interiors of the ship for filming. The Falcon is done -- inside and out. The sets were built off-site, ready to move when Lucasfilm/Bad Robot were ready to move into Pinewood."

Of course, as with nearly everything regarding Episode VII, none of this is official yet -- although the appearance of the Falcon would make a lot of sense given Abrams' love for the original trilogy and his repeated desire to honor the franchise's legacy.

The question is: If the Falcon does show up, who will be at the controls? Will it still be Han, with trusty Chewbacca at his side? Will it be the offspring of Han and Princess Leia? Or will it be the mysterious "military man" who has apparently been introduced into the new draft of the script that Abrams and Lawrence Kasdan have written?

We suspect it will be a while yet before we find out, but in the meantime, the possibility of the Falcon's return, combined with the confirmed appearance of this iconic character, suggests that Abrams and company intend to include a lot of links to Star Wars history.
Star Wars Episode VII arrives in theaters Dec. 18, 2015.
Posted by anim8trix at 12:00 AM