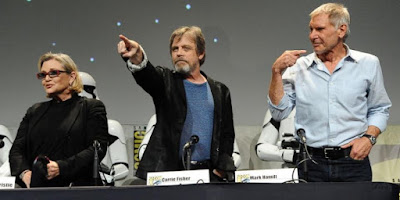 Missed out on Comic-Con?
Watch 10 of the biggest panels right now...
[Source: blastr.com] Another San Diego Comic-Con has come and gone. Movie stars, comics creators and con staff are likely in hibernation, attendees are adding all their new swag to their geeky trophy rooms, and everyone's trying to fight off the dreaded scourge of Con Crud. It was a big con, even without Marvel Studios, and everyone from Lucasfilm to Warner Bros. to Bill Murray brought their best to the dozens of panels the event hosted this year. By now, you've likely heard all the biggest news and seen all the biggest trailers, but what if you want a slightly more intimate Comic-Con-from-a-distance experience? What if you'd like to feel a little more like you actually did get to sit and watch Harrison Ford walk into Hall H?

Well, thanks to the magic of the Internet, you can. Dozens of high-quality videos of full panels have already hit the web, and more are likely to arrive before the week is out. So, if you want to get closer to the con, check out 10 of the biggest panels below.


Arrow, The Flash, Gotham, Legends of Tomorrow, and Supergirl