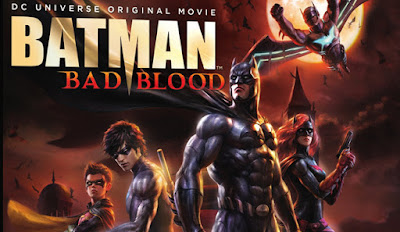 When Batman goes missing, it will take the entire Bat “family” – including new additions Batwoman and Batwing – to keep the peace in Gotham City and unravel the mystery behind the Dark Knight’s disappearance in "Batman: Bad Blood." Produced by Warner Bros. Animation and DC Entertainment, the all-new DC Universe Original Movie will be available from Warner Bros. Home Entertainment on February 2, 2016 on Blu-Ray™ Deluxe Edition, Blu-Ray™ Combo Pack and DVD. "Batman: Bad Blood" will be available in Digital HD on January 19, 2016.
Posted by anim8trix at 12:00 AM