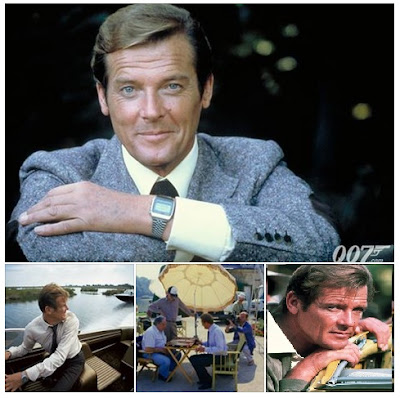 Sir Roger Moore has died at the age of 89. He played 007 in seven Bond films including Live And Let Die and The Spy Who Loved Me. Producers Michael G. Wilson and Barbara Broccoli have released the following statement:

"We are heartbroken at the news of Sir Roger Moore’s passing. On the screen, he reinvented the role of James Bond with tremendous skill, charisma and humour. In real life, he was a genuine hero working as a UNICEF Goodwill Ambassador for many years dedicating his life to alleviating the suffering of children all over the world. He was a loyal and beloved friend and his legacy shall live on through his films and the millions of lives he touched. We shall miss him enormously. Our love and thoughts are with Deborah, Geoffrey, Christian his grandchildren and his wife Kristina.”
Posted by anim8trix at 12:00 AM