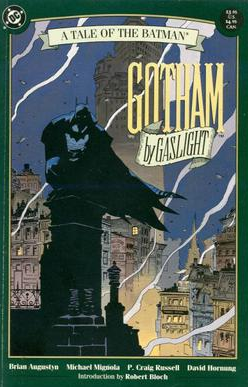 [Source: Syfy] Gotham by Gaslight was essentially the first Elseworlds imprint released in February of 1989, and the period-set one-shot issue was written by Brian Augustyn and drawn by Hellboy creator Mike Mignola. I recall reading it back in the day, absorbed in its Victorian-era Dark Knight prowling the moody, gaslit boulevards of Olde Gotham hunting down the notorious slasher Jack the Ripper, and thinking how cool this would be as a feature film. Well, we may not be getting a live-action rendition of this atmospheric tale, but an animated feature arriving in 2018 is a welcome consolation prize.

“In an age of mystery and superstition, how would the people of Gotham react to a weird creature of the night, a bat-garbed vigilante feared by the guilty and the innocent alike? The very first Elseworlds tale re-imagines the Dark Knight detective in Victorian times and pits him against the infamous murderer Jack the Ripper.”

Enter into the murky metropolis of this alt-history Bat-story in the preview below, and tell us if Batman: Gotham by Gaslight looks like a promising jaunt back in time.
Posted by anim8trix at 12:00 AM