A New Era Has Begun at Marvel... 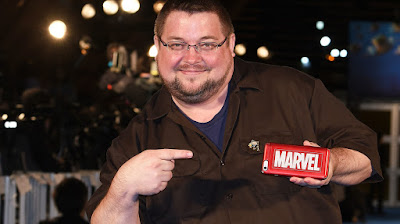 Marvel Entertainment President Dan Buckley announced in a statement Friday that Cebulski, who's been with the company in various roles for 15 years, will take the helm of Marvel's editorial division effective immediately. The company said that Marvel and Alonso "mutually" parted ways, but Alonso himself has not yet made a statement on his departure.

Cebulski started at Marvel in 2002 as an associate editor, where his most high-profile success was the launch of Runaways by Brian K. Vaughan and Adrian Alphona. The series was a runaway (pun intended) success with readers and cemented Cebulski's reputation for spotting talent and assembling effective creative teams.

He grew into one of the company's top talent scouts, frequenting conventions around the world searching for new creators to enrich the company. In 2011 he was promoted to vice president of international brand development for the company. In that capacity he's been a key force in Marvel's quest to expand its publishing arm to Asia, with new characters originating from countries like South Korea and Japan.

“C.B. is one of the most well-known, liked and respected editors and personalities in the comics industry. He has a keen understanding of the Marvel brand, and knows the importance of publishing within the larger Marvel ecosystem,” Buckley said in a statement (via The Beat). “As our characters continue to reach unprecedented levels of global popularity, we need to ensure our core comic business sets the standard with fresh and compelling graphic storytelling that excites both our longtime fan base and new fans. Marvel has set a high bar for super hero stories for over 75 years, and we believe C.B. is perfectly positioned to take Marvel Comics to new heights.”

In addition to overseeing the creative and editorial direction of the company, Cebulski will also continue to recruit and develop new talent, which has long been his specialty.

Alonso began his career at Marvel in 2000, where he was a senior editor on the X-Men line. In 2011 he replaced Joe Quesada's as the company editor-in-chief. His tenure in that job has been marked by several high sales years for Marvel, as well as successful events like Avengers vs. X-Men and Secret Wars. His tenure has also sometimes been marked by controversy, including fan criticism over excessive crossover events, fan diversity, and, most recently, the decision to convert Captain America into an agent of Hydra during the Secret Empire event.

It's unclear where Alonso will head next, or what Cebulski's first major decision will be in his new capacity, but this is a major and exciting creative shake-up at Marvel.
Posted by anim8trix at 12:00 AM