The Voice of Daphne Passes Away 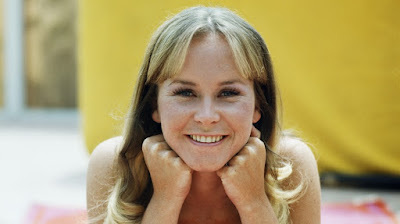 Heather North, the voice of Daphne on
Scooby-Doo for over 30 years, dies at 71
[Source: Syfy] Actress Heather North, who voiced Daphne Blake for the animated Scooby-Doo franchise for more than 30 years, has passed away at the age of 71.
According to The Hollywood Reporter, North died on Nov. 30 at her home in the Studio City area of Los Angeles after a long battle with an undisclosed illness.

North's acting career -- which included a stint on the daytime soap opera Days of Our Lives and parts in movies like Disney's 1971 The Barefoot Executive, opposite Kurt Russell -- took a turn into pop culture immortality when she replaced Stefanianna Christopherson as the voice of Daphne on the second season premiere of Scooby Doo, Where Are You! in September 1970.

North continued voicing "Danger Prone Daphne," one of the two female members of the teen detective team, in The New Scooby-Doo Movies from 1972 to 1973, and many other versions of the cartoon property in the years to follow, including TV series and direct-to-video movies. Aside from Scooby and Shaggy, Daphne made the most appearances out of all the regular characters. North voiced Daphne for the last time in 2003's Scooby-Doo and the Monster of Mexico.

The Pasadena native's other TV credits included Gidget, The Fugitive, The Monkees, My Three Sons, Adam-12 and more. Her husband of 44 years, H. Wesley Kenney, was an Emmy Award-winning producer and director who directed every episode of the classic sitcom All in the Family's 1974-1975 season. Kenney died in January 2015.

North is survived by a son, two stepchildren, and a granddaughter... and decades of Scooby-Doo cartoons that will remain her lasting legacy.
Posted by anim8trix at 12:00 AM