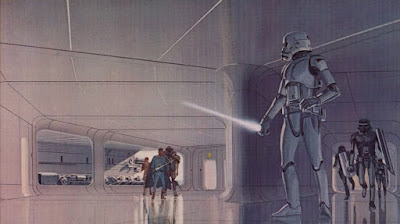 The Star Wars: Concept Trailer
A long time ago in a galaxy far far away... we might have seen a version of Star Wars that featured a Han Solo with green skin and gills, Stormtroopers with lightsabers, and a female heroine named Luka Starkiller. Many of these anomalies can be seen in concept artist, Ralph McQuarrie's early illustrations of the Star Wars universe. While looking back at these early paintings we can't help but wonder what Star Wars would have been like had it remained loyal to the concept art and early drafts of the script. The DAVE School graduating class of August and October 2017 have answered that question by bringing Ralph McQuarrie's paintings to life in a concept trailer for what might have been... The Star Wars. Find out more about our Visual Effects program at daveschool.com
Posted by anim8trix at 12:00 AM