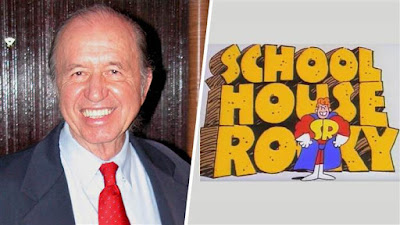 Bob Dorough
(December 12, 1923 – April 23, 2018)
'Schoolhouse Rock' composer and musician
An American bebop and cool jazz vocalist, pianist, composer, songwriter, arranger and producer. He was perhaps best known as the composer and performer of songs from Schoolhouse Rock!, a series of TV cartoons that appeared on Saturday mornings in the 1970s, 1980s and 1990s.

Robert Dorough was born in Cherry Hill, Polk County, Arkansas and grew up in Plainview, Texas. During World War II, he participated in Army bands as pianist, clarinetist, saxophonist, and arranger. After that, he attended North Texas State University, where he studied composition and piano.

According to his biography, the jazz musician "set the multiplication tables to music" as musical director for the educational cartoon series between 1973 and 1985. It was revived from 1993 to 1999.

He also wrote the song "Devil May Care," which jazz great Miles Davis recorded as an instrumental version.
Posted by anim8trix at 12:00 AM