"True love may fly into your heart!" 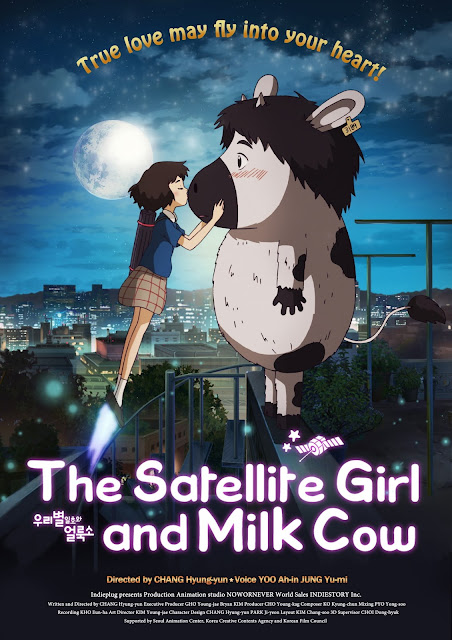 An out of commission satellite picks up a lovelorn ballad on her radio antenna and descends to Earth to find the source of such sincere emotions. But on the way she is caught in the crossfire of a raging magical battle and is transformed into Satellite Girl, complete with Astro Boy-like rocket shoes and weapon-firing limbs. Meanwhile, the balladeer in question - a loser 20 something at a café open mic - meets the fate that befalls all broken-hearted lovers: he is turned into a farm animal. But love knows no bounds, and aided by the wise and powerful Merlin - a wizard who has been turned into a roll of toilet paper - our duo must evade the all-consuming incinerator monster, the wily pig witch, and other nefarious adversaries in an attempt to be together. From the brilliant and slightly twisted mind of writer/director Chang Hyung-yun, SATELLITE GIRL AND MILK COW is a heartfelt and wildly entertaining commentary on the possibility for human connection in the crazy, mixed-up, post-modern world we live in.
Posted by anim8trix at 12:00 AM