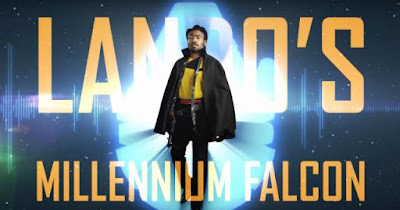 “This ship has probably never looked better than when Lando had it.”

[Source: Entertainment Weekly] In a new behind-the-scenes video, Donald Glover gives Star Wars fans a tour of the pristine Millennium Falcon as we’ll see it in Solo: A Star Wars Story, before his young Lando Calrissian lost the starship to Han Solo in a card game.

While Han used the Falcon as a speedy but dilapidated smuggling vessel, it’s clear Lando considered it a flying bachelor pad. Glover walks us through the living quarters, suitable for entertainment with a sound system and adjacent food and coffee bar. (Note: Wookiee cookies. For when Chewie needs to be reminded “Who’s a good boy?”)

Then we get a tour of the sleeping quarters. 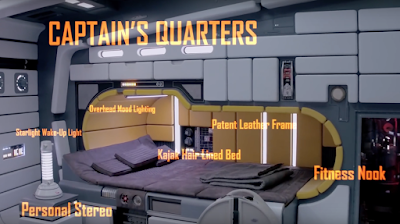 “These pillows are made of actual kajak hair,” Glover explains. “That’s not easy to get.”

There’s no record of what (or who) a “kajak” is, but EW has asked Star Wars story group maestro Pablo Hidalgo. We’ll update with whatever he can share. 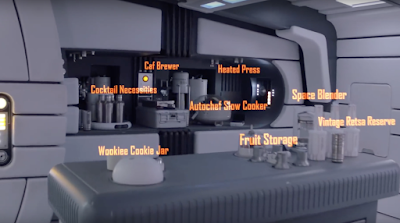 Adjacent to the captain’s room is the cape closet. Glover walks us through Lando’s attire for every occasion: “an everyday cape… sister’s wedding cape… Intergalactic president’s day cape …” He holds out a fur-covered one. “This is just an if-someone-gets-cold-cape.”

I’d like to see a tour of the Falcon by Han after he finishes grubbing it up.