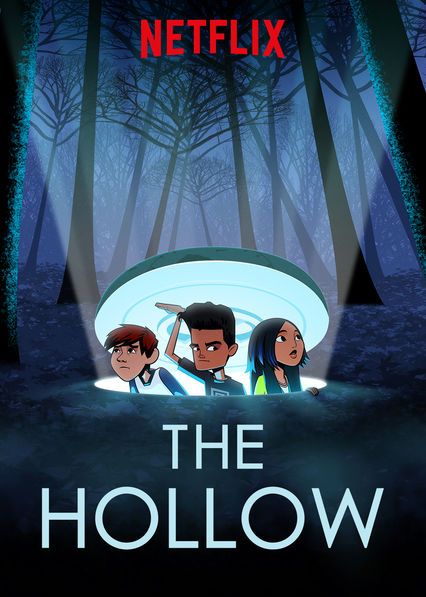 THE HOLLOW
"Three teens join forces to find a way home after waking up in a strange realm filled with magic portals, perplexing puzzles and vicious beasts."
Adam, Kai, and Mira wake up in a high-ceiling room with no doors or windows, but a single vent near the top. They have no memories of who they are. The only items with them are small slips of paper with their names on them and a typewriter. To escape, they use the typewriter to type "help", which causes four bricks to move forward and act as ledges leading to the vent. As the room begins filling up with green smoke, they make their way up to and through the vent, eventually winding up at an exit that leads to a forest. Mira discovers that she was able to translate an owl's hoots. After escaping the underground bunker, the trio continue to walk through the forest, ending up at an electrified fence. They search for a switch to deactivate it and soon find an abandoned cabin. Inside, there are science equipment, a satchel they take, and three cages seemingly torn apart by their ex-captives. Shortly after, they encounter three "Devil Dogs" that begin to chase them. Running towards the fence, they see the deactivation switch for the fence and use keys found in the satchel to make their escape. Not far from the fenced area, they are trapped at the edge of a cliff with the creatures quickly digging their way under the fence. The three meet someone who they call the "Weird Guy". After they ask for help with the magic word "please", he creates a portal in which they fall through. On the other side, just before passing out, Adam blearily sees two menacing figures with horns speaking in a foreign language discussing what to do with the trio.