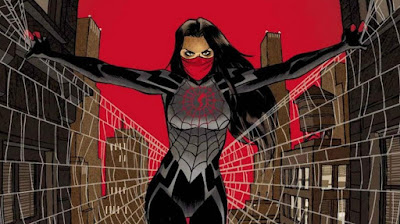 Sony Chief Teases Spider-verse Sequel
With Silk and Jessica Drew
[Source: Syfy] Spider-Man: Into the Spider-Verse may have just opened in theaters, but Sony already has grand plans for its budding franchise, having already announced a direct sequel and all-female spinoff.

During a recent chat with Vanity Fair, Sony chief Amy Pascal revealed more details about both upcoming projects. For one, the direct follow-up will focus on a budding romance between Miles Morales (Shameik Moore) and Gwen Stacy (Hailee Steinfeld), which wasn't included in the current film due to pacing reasons. The sequel will be written by David Callaham (Wonder Woman 1984) and directed by Joaquim Dos Santos (Avatar: The Last Airbender).

In terms of the spinoff, Pascal let slip that Gwen will be joined by fan favorites like Cindy Moon (Silk) and Jessica Drew (Spider-Woman). Since Peni Parker (voiced Kimiko Glenn) is also introduced alongside Gwen in the first film, it is unclear if she'll also appear in the spinoff as well. Lauren Montgomery (co-director of Batman: Year One) is in talks with to helm the feature, with Bek Smith (Zoo) writing the screenplay.

There is a much larger plan for all of these Spider-People, though. “There’s a world in which everything comes together,” Pascal told Vanity Fair. “But that’s not something we can talk about yet.”

What that means in anyone's guess, but it would be wickedly awesome if Sony decided to adapt Dan Slott's "Spider-Verse" arc from 2014, in which the Spider-People faced a nearly unstoppable threat in the form of the soul-sucking Inheritors. This storyline brought together some of the coolest Spider-related characters in the Marvel multiverse like the Superior Spider-Man (Otto Octavius brain in Peter Parker's body), Spider-Monkey (who could be a good foil for John Mulaney's Spider-Ham, just FYI), Spider-Man 2099, and so many more.

“What I love about this movie, honestly, is that there’s so many different spider people,” Jake Johnson, who voices Peter Parker in Spider-Verse, told SYFY WIRE recently. “There’s Spider-Gwen, there’s Spider-Ham. I like that Miles is the lead. I also like the old school Peter Parker.”

Produced by Phil Lord and Chris Miller, Spider-Man: Into the Spider-Verse is now playing in theaters.
Posted by anim8trix at 12:00 AM