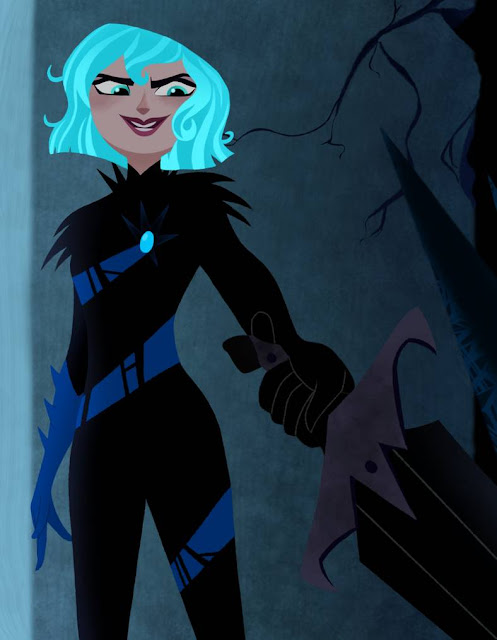 Cassandra's betrayal of Rapunzel is captured in musical form in a way only Disney can make it. 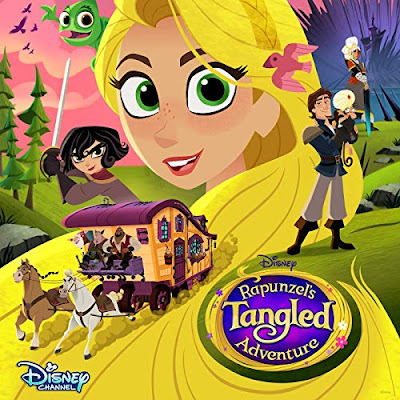 Rapunzel's Tangled Adventure
So far, 3 Seasons... and a Total of 52 Episodes!
Since being freed from Mother Gothel and reunited with her birth parents, King Frederic and Queen Arianna of Corona, Princess Rapunzel adjusts to life as their daughter and continues to have different misadventures with her boyfriend Eugene Fitzherbert, Pascal the chameleon, Maximus the horse, and her new handmaiden Cassandra, to uncover the mystery of her 70-foot long blonde hair's return and its new mystical abilities. 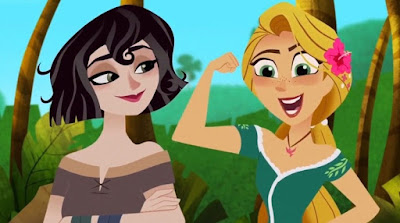 The second season centers around Rapunzel, Eugene and Cassandra's journey accompanied by Lance, Hook Foot, and Shorty to solve the mystery of the black rock spikes and unveil Rapunzel's connection to them. They are also aided by the mysterious sword-wielding Adira who hails from the Dark Kingdom, From where the mystical rock spikes originated. As her journey progresses, the barefoot princess learns that the outside world isn't all fun and games. 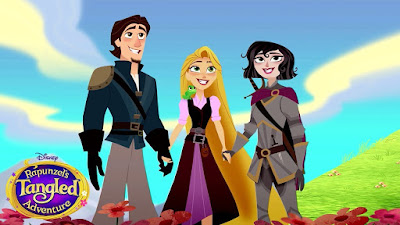 In the third season, Rapunzel and the group return to Corona where Rapunzel assumes the role of temporary queen and must find the strength inside herself to protect her home and loved ones as she and her friends face new challenges that threaten the kingdom. However, Rapunzel must also come to terms with Cassandra's recent betrayal and live with the fact that her closest friend and confidante has now become one of her most dangerous of enemies and prepare herself for whatever she has planned for the future.

Cassandra discovers that she can create red rock spikes which induce pure fright and fear into those nearest to them. Corona suddenly finds itself covered in them and when people give in, they turn red and freeze up. Varian, who fears to lose his father again and being viewed as a traitor to the whole kingdom, teams up with Princess Rapunzel to use his solution of the amber, the same one that had fully encased his father a year ago, to use on the red rocks in the Chamber of the Demanitus Device (from "Queen for a Day"). Meanwhile, Eugene and Lance decide to throw on a talent show to distract everyone, with Lance overcoming his fear of singing in public to invigorate the crowd. Rapunzel and Varian realize that the solution does not work on the red rocks, only the black rocks. Princess Rapunzel, who has been hiding her fear, reveals that she is afraid of losing Cassandra as a friend forever and her destroying Corona. Varian overcomes his fear to deliver the solution, all of Corona is saved and people begin to respect Varian again. The Enchanted Girl tells Cassandra that Rapunzel is out to get her and take all her newfound power, and convinces Cassandra to kill her former friend and destroy Corona. Rapunzel, who sensed Cassandra's fear through the rocks, tells Eugene that they can still save her.