D  E  A  T  H     S  T  R  A  N  D  I  N  G
The game is set in an apocalyptic United States, where a cataclysmic event known as the "Death Stranding" caused "BTs"—invisible creatures originating from the "Beach", a land said to be the link to the afterlife—to begin roaming the Earth. BTs cause explosions known as "voidouts" when they consume the dead by necrosis, and produce rains known as "Timefall"—which rapidly age and deteriorate whatever it hits. These events damaged the country's infrastructure, leading its remaining population to confine themselves to remote colonies known as "KNOTs", which form the remaining "United Cities of America".
These colonies have since relied on the services of a company known as Bridges, whose porters brave the BTs, bandits, and terrorists to deliver supplies to the cities. Bridges also performs various governmental functions on behalf of the UCA. If they achieve a mental connection to a "Bridge Baby"—a premature child reflecting a state between life and death—it is possible for a person to sense the presence of a BT. Porters carry a bridge baby with them, which is stored in a pod simulating a mother's womb. A condition known as "DOOMs", depending on its severity, also allows a person to naturally sense, see, or even control a BT. There are also individuals designated as "Repatriates", people who can travel back from the Beach upon death, effectively coming back to life, though their deaths will still cause voidouts. 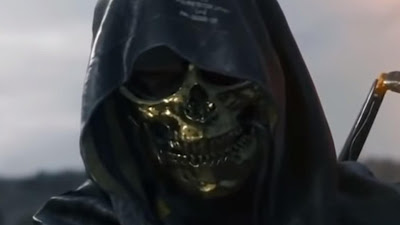 Sam Porter Bridges (Norman Reedus) is transporting cargo when his progress is interrupted by Timefall and receives assistance from Fragile (Léa Seydoux) in evading a BT. When she leaves, Sam continues his delivery. He arrives at his destination Central Knot City, only to be warned that one of the citizens has committed suicide and their corpse is on the verge of necrosis. Due to being both a Repatriate and having DOOMs, Sam is assigned to transport the corpse to an incinerator to safely dispose of it, but an attack from BTs prevents him from stopping it from becoming a BT and causing a voidout, destroying Central Knot City. He awakes in Capital Knot City and meets Deadman (Guillermo del Toro/Jesse Corti), a doctor from Bridges. Sam is then tasked to deliver morphine for the dying president of the UCA, his mother Bridget Strand (Lindsay Wagner/Emily O'Brien). He also meets Die-Hardman (Tommie Earl Jenkins), the director of Bridges and Sam's former boss before he left the organization. Bridget pleads with Sam to rejoin Bridges and help rebuild America before succumbing to her illness. Sam transports Bridget's body to be incinerated but refuses to incinerate BB-28, a Bridge Baby that has been marked for retirement. With BB-28's assistance, Sam is able to evade a horde of BTs and return to Capitol Knot City. Sam decides to take BB-28 as his own Bridge Baby, nicknaming him Lou.

Upon his return, Sam is reunited with his sister Amelie Strand (also Wagner/O'Brien). She tells him that over the past three years, she has led an expedition across what is left of the continental United States, making contact with the remaining cities and survivor settlements and setting up terminals that would allow them to connect to the Chiral Network, a system that would allow instantaneous communication across vast distances. However, upon reaching the last city on the West Coast, Edge Knot City, Amelie was captured and is being held hostage by an anti-UCA terrorist group called the Homo Demens to guarantee Edge Knot City's independence. Even though she is a hostage, she is still allowed to freely communicate with Bridges via the Network. She tells Sam that he must follow the path of her expedition and use a special Q-pid key to activate the terminals she left behind. Then he must rescue Amelie and bring her back so she can take Bridget's place as the President of the UCA. Sam reluctantly accepts the mission since it is his only opportunity to find and rescue Amelie.
▶ Watch the Movie

Sam then embarks on his mission to connect all of the remaining cities to the Network. Along the way, he delivers valuable cargo, assists other Bridges staff like Mama (Margaret Qualley), Heartman (Nicolas Winding Refn/Darren Jacobs), and Mama's twin sister Lockne (also Qualley) in researching the Death Stranding, and thwarts plots by the Homo Demens and their leader, Higgs Monaghan (Troy Baker). He also views Lou's memories, which show Lou's apparent father, Clifford Unger (Mads Mikkelsen). Clifford himself, now a spectral entity, occasionally attacks Sam in an effort to recover Lou. Sam's journey finally culminates in a direct confrontation against Higgs in Amelie's Beach. Higgs reveals that Amelie is actually an Extinction Entity, a godlike being that can use the Death Stranding to trigger mass extinction events. However, Higgs seeks to trigger more than a mass extinction, but a Last Stranding, which is the complete annihilation of all life on Earth. Sam defeats Higgs, who commits suicide to avoid being trapped on the Beach. Sam is forcefully ejected from the Beach by Amelie. He later discovers that as the Extinction Entity, Amelie and Bridget were both the same being, with Bridget existing in the world of the living while Amelie could only manifest on the Beach. In addition, Amelie was the true leader of the Homo Demens, seeking to trigger the Last Stranding to end the cycle of extinction. Sam confronts Amelie one final time and convinces her to stop, though the only way for her to avert the Last Stranding and delay humanity's extinction is to permanently separate herself and her Beach from the world of the living.

In the aftermath, Die-Hardman takes Amelie's place as the President of the UCA, with the rest of the Bridges staff dedicated to keeping the UCA safe. Fragile resolves to rebuild her trading company. Sam is told that Lou has died, and is assigned to transport the corpse to the incinerator. He connects with Lou one last time and discovers the memories he has been viewing aren't Lou's, but his own, making him Clifford's son. Clifford died trying to smuggle the infant Sam out of a Bridges lab. Sam was also killed in the incident but was revived by Amelie, establishing their connection and turning him into a Repatriate. Since Sam was no longer suitable to be a Bridge Baby, Bridget instead decided to adopt him and raise him as her own son. Back in the present, Sam decides not to incinerate Lou and manages to resuscitate them.

In the final scene, Sam refers to Lou as "Louise", revealing that she is, in fact, a girl.
Posted by anim8trix at 12:00 AM