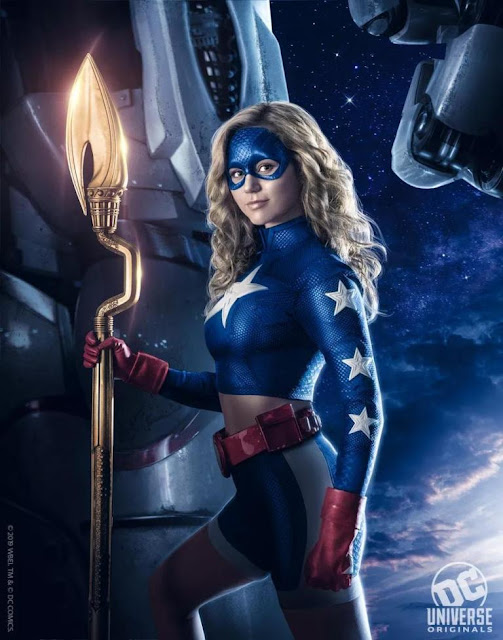 - S T A R G I R L -
[Source: ToonZone] Next year, WB’s superhero-centric streaming service DC Universe will premiere a brand new series, Stargirl. That means this spring, you’ll be able to watch it — on The CW. Wait, what?

In an unexpected move, WB has decided to air each episode of Stargirl’s first season the day after they become available on DC Universe. It seems unwise... Why would anyone pay for what they can get for free? Perhaps the hope is that, after seeing Stargirl, viewers will be enticed to watch the other DC Universe programs on the service (or on HBO Max, since that will be active by this point).

Stargirl stars Brec Bassinger as the titular superhero, spangled in stars and wielding a giant wand. When the timeline is threatened (this has nothing to do with the CW’s Crisis crossover), she forms an alliance with the world’s first team of superheroes, the Justice Society of America, and they battle villains from the past and present.

The show will also star Anjelika Washington (Shameless), Luke Wilson and Amy Smart. Geoff Johns, co-creator of Stargirl, will serve as showrunner alongside Melissa Carter (Queen Sugar), and in the position of producers are Sarah Schechter and Everywhere Man Greg Berlanti.

That’s really all we know about Stargirl at this point; no trailers or screenshots have been released by WB beyond the one-shot of Brec in her outfit.
Posted by anim8trix at 12:00 AM