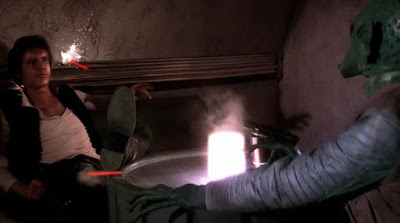 GREEDO: "Mcklunky!"
[Source: Gizmodo] Just when fans though a brand new live-action Star Wars TV show would be the biggest headline with the launch of Disney+, a historical change is there to challenge for the title.

Yes, it’s true. The Han shot first scene has been altered. Again. And this time, it’s kind of hilarious.

Yes, Greedo screams something in Rodese—the Rodian language, which itself has similarities to the Huttese spoken by Jabba and other alien characters in the trilogy—that sounds like “Makunke!” or “Maclunky!” before shooting now as if to warn Han what’s about to come. No one ever talked after Han said, “I bet you have” before.

The question you’re asking is “Why?” And we don’t know. What we do know is “How.” According to Vanity Fair, and confirmed by io9 via Lucasfilm, George Lucas himself made this change “at least seven years ago” before Disney acquired the company. In that timeframe, we believe that change was made when the director converted the film to 4K for a planned 3D release which never happened. But, the 4K version remained, with this change, and now that’s the one on Disney+.

Since this was a Lucas change, odds are we’ll never know exactly why he did it.
Posted by anim8trix at 12:00 AM