Fun Facts You Didn't Know About "Over the Moon"

Fun Facts You Didn't Know About
OVER THE MOON
Did you know that Fei Fei's hometown is based on Wuzhen, China?
We have 16 fun facts to share from the behind the scenes of Over the Moon!
▶ Watch the Video
A girl named Fei Fei is being told the legend of the moon goddess Chang'e who took a potion for immortality, causing her to become a goddess and ascend to the moon without her lover Houyi, and awaits for him on moon. In preparation for the annual Moon Festival, Fei Fei and her family make mooncakes for the village. Fei Fei's mother falls ill, and gifts her daughter a bunny named Bungee, before passing away. 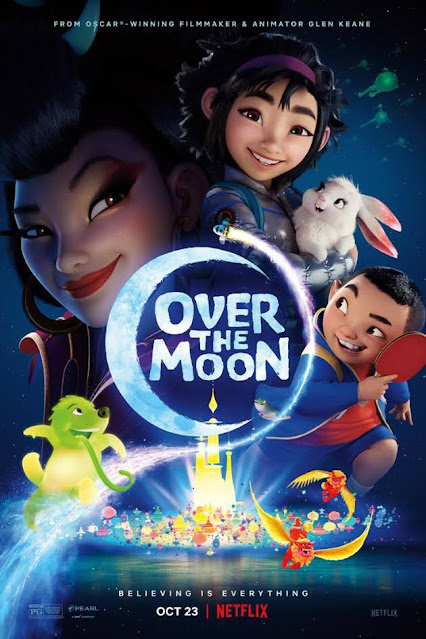 Fei Fei, who still believes in Chang'e four years later, is upset when she learns that her father is engaged to Ms. Zhong, and is annoyed by her stepbrother, Chin. Fei Fei's family joins them for the Moon Festival celebration, and she remembers her mother. Inspired by a crane and the legend of Chang'e, she decides to build a rocket to the moon to prove that Chang'e is real. She designs a rocket that resembles a Chinese paper lantern in the shape of a rabbit that uses fireworks to boost her speed. Her rocket almost succeeds until she realizes that Chin snuck aboard her rocket and they begin to crash to earth. Suddenly, the rocket is captured in a mystical beam of energy and taken to the moon. They crash land after being beset by playful spirits, who then rescue them and take them to Lunaria. 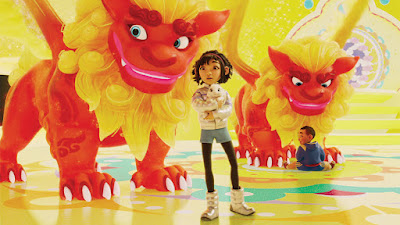 They are introduced to Chang'e and her backup dancers the Lunettes, who are performing a concert for the citizens of Luminaria. Chang'e tells Fei Fei that she has brought a gift for Chang'e to bring Houyi back. Fei Fei takes a photo with Chang'e to prove to her dad she is real, but Chang'e takes the photo from Fei Fei and demands the gift. Fei Fei doesn't know what she is talking about, and a frustrated Chang'e announces a competition to bring the gift to her before the last of the moondust falls so that she can bring Houyi back. Fei Fei gets upset with Chin and leaves him, getting a ride with the Biker Chicks to the crash site. Chin sees some Lunettes with the photo and is captured by Chang'e who demands the location of the gift. Chang'e challenges Chin to a game of ping pong which Chin wins, further upsetting Chang'e, who cries in despair that she will never see Houyi again, causing a meteor shower with her emotions. Meanwhile, Fei Fei and the Biker Chicks head to her rocket's crash site, where Fei Fei discovers her Chang'e doll. She deduces that this is the gift, but before she can leave, she discovers an exiled Lunarian named Gobi and is betrayed by the Biker Chicks, who take the doll and leave Fei Fei and Gobi in the rubble. 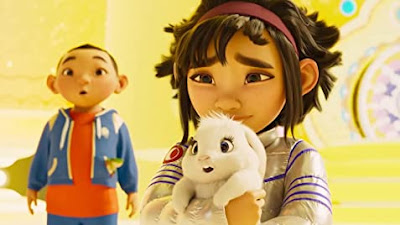 Fei Fei and Gobi head to Lunaria on the backs of giant toads, where Gobi reveals that Chang'e exiled him due to a song he sang to her about moving on. Fei Fei and Gobi catch up to the Biker Chicks, but during their scuffle the doll is destroyed. However, Fei Fei discovers in one of her mooncakes a broken piece of an amulet and realizes that it is Chang'e's gift. They return to Lunaria’s palace and regroup with Chin and Bungee, and return the gift to Chang'e. Afterwards, Chang’e is finally able to complete a ritual with the amulet meant to bring back Houyi. Chang'e and Houyi are briefly reunited, but Houyi explains he cannot stay and begins to fade away as he tells Chang’e to move on. Refusing to accept this, Chang’e slips into a depression, causing all the light in Lunaria to distinguish. 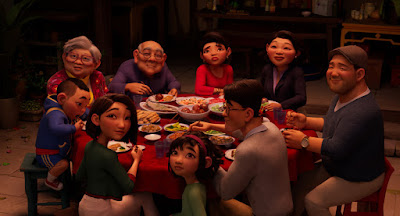 Fei Fei tries to reach out to Chang’e, but the moment she enters Chang'e's state of sadness, she as well becomes depressed due to a vision of her mother. Realizing that they both must move on from their tragedies, Chang’e and Fei Fei encourage each other to find the new love all around them, for Chang’e in the form of the Lunarians and for Fei Fei in the form of Chin. This allows the two to accept their loved ones’ deaths and effectively move on from them, restoring life to Lunaria. 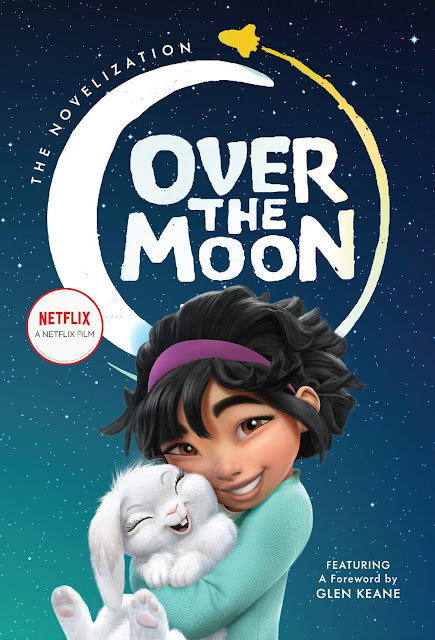 Chang'e thanks Fei Fei and allows her and Chin passage back home, where Fei Fei must face the fact of whether or not to accept her father and Ms. Zhong’s marriage.
Posted by anim8trix at 12:00 AM