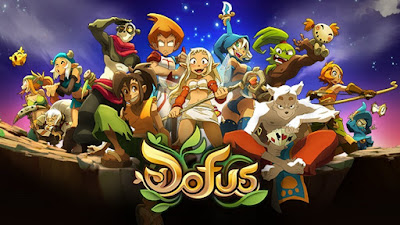 DOFUS – L’île de Grobe
The adventure continues on Pandala. The second part of the "Awakening Pandala" update will soon give you access to Grobe Island. Are you foolish enough to venture into the Ancestral Graveyard of the Pandalians? Play the next chapter of DOFUS in the World of Wakfu. Dofus is a tactical turn-oriented massively multiplayer online role-playing game developed and published by Ankama Games,

Dofus takes place in "The World of Twelve", named for the 12 gods that inhabit it. Players control a 2D avatar belonging to one of 18 character classes in a third-person view. Each class has a unique set of spells that other classes can not obtain. As with most other massively multiplayer online role-playing games, players gain levels by obtaining experience. Experience can be gained by defeating monsters and completing quests. With each level, players gain points that can be used to improve their avatar's characteristics and spells. Players can access new spells and equipment by advancing in level. Players receive a special 'aura' when they reach level 100, and gain a different aura at 200, the maximum level. Players may also decide to take up professions and frequently band together to undertake dungeons. Many also become part of guilds, to more easily coordinate with others. Players complete quests to gain experience and other rewards.

While the game takes place in real-time, combat in Dofus is conducted more like a turn based strategy game – where each player takes it in turns to make a series of moves and attacks within a time limit. As such, when a player attacks monsters – they are transported to a 'copy map' where the fighting takes place. Once a fight begins, no other players may join that fight. Players use a series of spells (which are unique to that character class) to, amongst other effects, attack, heal, buff or drain one's Action Points (AP) or Movement Points (MP). All actions done in combat (by both players and monsters) consumes an amount of AP and all movement consumes MP. In combat if a character loses all of their health points (HP) they're rendered dead.

Characters in Dofus can learn various professions. There is a special type of profession called a specialization which can enhance item stats. Collecting professions involve players going out into the wilderness and collecting natural resources, such as certain wood and flowers. These can be made into breads and the like that restore health. They may also be sold as many of them are needed as quests items. Crafting professions involve the player piecing collected resources together to make a vast array of different items. Players gain experience in each profession by gathering the resources of that profession and/or by crafting items, depending on the type. As a player's collecting profession gains levels, they can collect new types of resources and obtain resources quickly. When a crafting profession levels, the player can create more powerful items and create them with a higher success rate, meaning that crafting will fail less often.

The currency used in Dofus is called "Kamas" (k). There are three cities that contain a marketplace where people can buy and sell goods and equipment for a fee. The kamas from these sales deposit directly into the player's bank account. Accounts are separated into two categories, Free-to-Play and Pay-to-Play. The game includes a zone accessible to Free-to-Play accounts. Free accounts have access to the new player zone of Incarnam and access to the city of Astrub and most of its outlying areas. This makes it possible for a new player to enjoy seemingly full game play, unbounded by time restrictions. Access to the entire world of Dofus—including access to other cities, participating in factional Player vs. Player battles and being able to raise profession levels above 30—requires a monthly fee, with discounts given for longer term subscriptions.
▶ Watch the Teaser
Posted by anim8trix at 12:00 AM