When your best friend is a ghost... 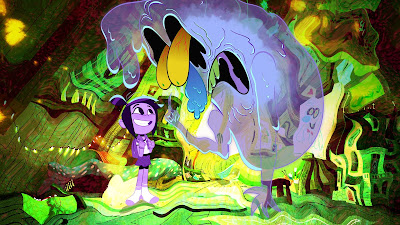 Disney's THE GHOST AND MOLLY MCGEE
Tween optimist Molly McGee and a grumpy ghost named Scratch become bound to each other when one of Scratch's spells backfires. Molly lives to make the world a better place, fix what has gone wrong, and spread joy, whereas Scratch wants to make the world a worse place, break what has gone right, and spread misery. Despite their differences, the two form an unlikely friendship and find themselves helping each other through the ups and downs of their respective worlds. The series incorporates elements of musical-comedy, horror and the supernatural, yet nothing too scary. After all, this is produced by Disney! 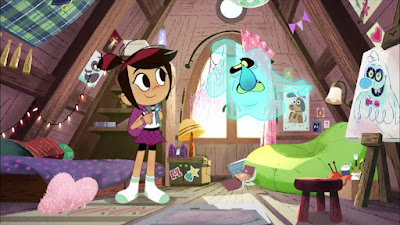 In the first episode, the McGee Family moves into a now decrepit house in their new town of Brighton that just so happens to inhabit, Scratch, one of the worst ghosts in the Ghost Realm. Molly, the daughter, immediately "befriends" him and in his anger accidentally curses her so that he is forever tied to her. He tries to scare the family out of the house so that the curse can be broken, but Molly convinces the family to stay. With the advice of her Grandma Nin, she makes a Sal Phra Phum for Scratch who graciously accepts it under the condition he be fed. In the Ghost Realm, the chairman sees that Brighton is less miserable.

Molly is nervous about her first day at school which Scratch tries to take advantage of, but she throws caution to the wind. She attempts to make a good first impression, but ends up upsetting influencer Andrea Davenport after mispronouncing her name and becomes a pariah alongside similar student Libby. When Molly refuses to back down, Scratch accidentally causes Andrea to faint. Everyone begins to insult Molly, but in an empathic moment, Scratch possesses Andrea's body and tells everyone that Molly and Libby are cool. Molly accuses Scratch of caring about her, much to his chagrin.
▶ Watch the Trailer
Posted by anim8trix at 12:00 AM