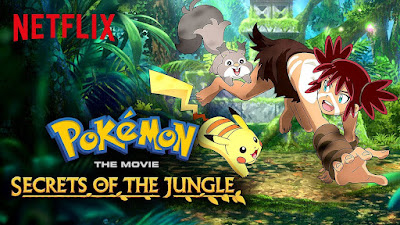 Pokémon the Movie: Secrets of the Jungle
Koko grows up in the jungle with a solitary Zarude. When he meets Ash and Pikachu, he discovers the human world — and a plot threatening his home!
In the Forest of Okoya, the Mythical Pokémon Zarude finds an infant boy in a cradle washed up on a riverbank. Unable to leave the child on his own, Zarude adopts him as a son, giving him the name "Koko". Zarude leaves his tribe, which inhabits a Great Tree deep in the jungle where humans are forbidden to venture, to raise Koko.

▶ Watch the Trailer
Ten years later, Ash Ketchum and Pikachu visit the Forest of Okoya from nearby Milyfa Town. While attempting to capture a wild Cramorant, Ash and Pikachu encounter a research team from the Biotope Company, a scientific organization studying the jungle. Team Rocket, covertly following them, look up information on the Biotope Company and its leader Dr. Zed, and decide to infiltrate the group. Later, Ash sees Koko go over a waterfall, after he got knocked out from a pipe while swinging on a vine with a wild Skwovet, and retrieves him from the water, bringing him to Milyfa Town's Pokémon Center for treatment. When Koko awakens, he becomes alarmed and escapes the building, having never seen other humans before. Discovering that Koko believes himself to be a Pokémon, Ash and Pikachu spend time with him in the town, helping him to learn about humans for the first time. 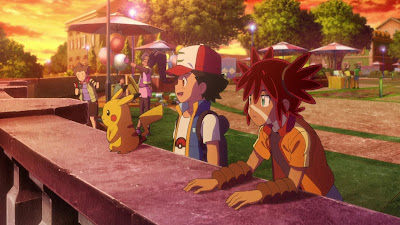