We Are Batman - Make-A-Wish Animation 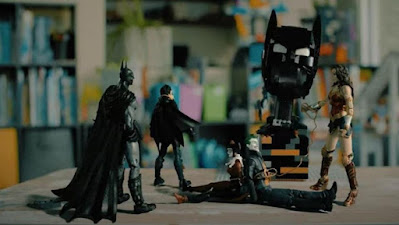 WE ARE BATMAN
Make-A-Wish Stop-Motion Animation
Oklahoma studio Reckless Abandonment Pictures is back at it again with a "Bat-Tastic" stop motion to make a wish come true for a 12-year-old kid facing a rare disease by helping him create a Batman stop-motion animation. Happy Batman month, y'all!
Reckless Abandonment creative director Kyle Roberts is known for his stop-motions, animating commercial work for LEGO, DreamWorks, Disney, Hasbro, Mattel, etc.

“Make-A-Wish contacted me and told me that they have a 12-year-old kid that loves animation and our stop motions,” Roberts said.

Booker, who has a rare disease called Shwachman-Diamond, has a passion for stop-motion animation and wanted to check out the Reckless Abandonment studio for his wish.
“I felt honored they even thought of us, but wanted to level up Booker's wish by actually producing a STOP MOTION ANIMATION with him! So the wish was set, for Booker to produce a stop motion with our team,” Roberts said.
“Starting pre-production, we asked Booker who his favorite superheroes are. First up, Batman, then Superman, Joker, Harley Quinn, Wonder Woman and Robin. Our team crafted a short story with Booker and once we got the story locked in, began storyboarding and animating the stop motion,” Roberts said. Booker's take on why he loves Batman; "Three main reasons. Because he is good with tech (Batarangs). He is trained as a Ninja. His costume and personality are scary but he is good." All fair points!
Booker came to the studio for one of the animating days and also made a live action cameo with his dad! After 1,200 individual photos and 3 weeks of work, the stop motion animation part of the production was wrapped. Booker also came to the studio for a day during post production where the team walked through tricks and tips in compositing and rotoscoping. "I liked getting to hang out with people who like stop motion as much as I do. I'm thankful for the Reckless team for explaining how it works. It was a dream come true to make this stop motion with them," Booker said.
"I am very thankful that the Reckless and Make-A-Wish looks out for kids like me who have an illness," Booker said.
“Booker is such a radical dude,” Roberts said. “I was amazed how quickly he picked up animating with the toys. Booker is also a pretty incredible artist. Our team took one of his drawings and 3D Printed/Painted it! Meet Papalo, a teenage mutant plant dude! Booker had a whole back story on Papalo. I asked him if he was a Hero or Villain... and Booker said ‘He's a little of both.’”
▶ Watch the Video

Email ThisBlogThis!Share to TwitterShare to FacebookShare to Pinterest
Labels: stop-motion