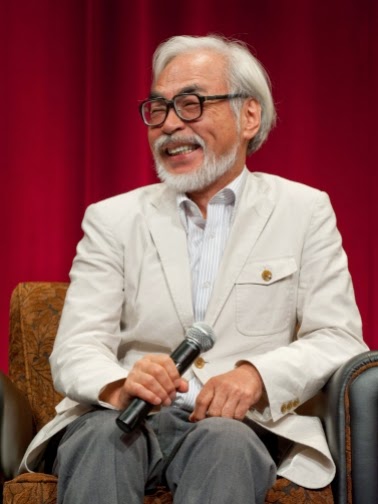 H A Y A O   M I Y A Z A K I
Born in 1941 in Tokyo, Japan.  After graduating from Gakushuin University in 1963 with a degree in Political Science and Economics, Hayao Miyazaki joined Toei Animation Company as an animator.  He worked under the director Isao Takahata for scene planning and key animation for the production of THE LITTLE NORSE PRINCE VALIANT (1968).  He then moved to the animation studio A Production with Takahata in 1971 where he worked on the original concept, screenplay, layout design and key animation for PANDA! GO PANDA! (1972).  Miyazaki worked at various studios including Zuiyo Eizo with Takahata, Nippon Animation, and Telecom, and did scene planning and layout designs for the TV series HEIDI, A GIRL OF THE ALPS (1974) and FROM THE APENNINES TO THE ANDES (1976), and directed his first TV series CONAN, THE BOY IN FUTURE (1978).  He debuted as a director of theatrical features with THE CASTLE OF CAGLIOSTRO (1979).  In 1984, Miyazaki wrote and directed his feature NAUSICAÄ OF THE VALLEY OF THE WIND, based on his original graphic novel serialized in the monthly animation magazine “Animage”.

Miyazaki co-founded Studio Ghibli in 1985 with Takahata, and has directed nine feature films since, including CASTLE IN THE SKY (1986), MY NEIGHBOR TOTORO (1988), KIKI’S DELIVERY SERVICE (1989), PORCO ROSSO (1992) and PRINCESS MONONOKE (1997).  SPIRITED AWAY (2001) broke every box office record in Japan, and garnered many awards, including the Golden Bear at the 2002 Berlin International Film Festival and the Oscar for Best Animated Feature Film at the 2003 U.S. Academy Awards.  HOWL’S MOVING CASTLE (2004) received the Osella Award at the 2004 Venice International Film Festival.  Miyazaki was awarded the Golden Lion for Lifetime Achievement at the 2005 Venice International Film Festival.  He wrote and directed PONYO ON THE CLIFF BY THE SEA (2008).  He contributed to the planning and wrote the screenplays for Hiromasa Yonebayashi’s ARRIETTY (2010) and Goro Miyazaki’s FROM UP ON POPPY HILL (2011).  In 2012, Miyazaki was named a “Person of Cultural Merit” by The Government of Japan.

Miyazaki has published a number of books of essays, drawings and poems, including “Shuppatsuten 1979-1996 (Starting Point: 1979- 1996, 1996)”.  He has designed several buildings, including the Ghibli Museum, Mitaka, which opened in 2001, for which he serves as Executive Director.  His new film, THE WIND RISES, opened in July 2013 in Japan.

Pixar chief John Lasseter presented Miyazaki with an Oscar statuette, calling the Japanese animator "the most original filmmaker to ever work in our medium."

Accepting the trophy, Miyazaki said through a translator that he considered himself lucky, adding, "My greatest luck is that I got to meet Maureen O'Hara today."

The 94-year-old O'Hara was introduced by Liam Neeson and Clint Eastwood, each of whom confessed to having a crush on the Irish-born beauty. Neeson described her as "one of the true legends of cinema" and "one of the most adventurous women who ever lived," explaining the actress was a pioneer in doing her own stunts on screen.
O'Hara came to the stage in a wheelchair and read a brief statement of thanks in which she acknowledged filmmakers Charles Laughton and John Ford, along with her co-star in several films, John Wayne.

When Neeson handed her the Oscar, she asked in disbelief, "What's this?!"

"I only hope it's silver or gold and not like a spoon out of the kitchen," she said.

Carriere accepted his Oscar from "The Unbearable Lightness of Being" director, Philip Kaufman. The French screenwriter lauded the many directors he's collaborated with over his five decades in film, saying, "They're always present, even today. When I'm working, I hear their voices."

Chris Rock and Susan Sarandon introduced Belafonte, who received the Jean Hersholt Humanitarian Award for his decades of activism for social justice.
"I'm not here to honor you," Rock said. "I'm here to thank you."

Belafonte said he was moved by the recognition.

"To be rewarded by my peers for my work for human rights, civil rights and for peace... It powerfully mutes the enemy's thunder," he said.

He shared the honor with Poitier, whom he referred to as "my elderly friend."

"He redirected the ship of racial hatred in American culture," Belafonte said.

He spoke of Hollywood's progress toward telling stories that offer "deeper insights into human existence," such as "Schindler's List," ''Brokeback Mountain," and "12 Years a Slave," and film's far-reaching ability to influence popular opinion.

"Maybe, just maybe, it could be civilization's game-changer," he said.

The Academy of Motion Picture Arts and Sciences established the Governors Awards in 2009 to celebrate the annual winners of its honorary awards. Highlights from the ceremony will be included in the 2015 Oscar telecast.
Posted by anim8trix at 12:00 AM