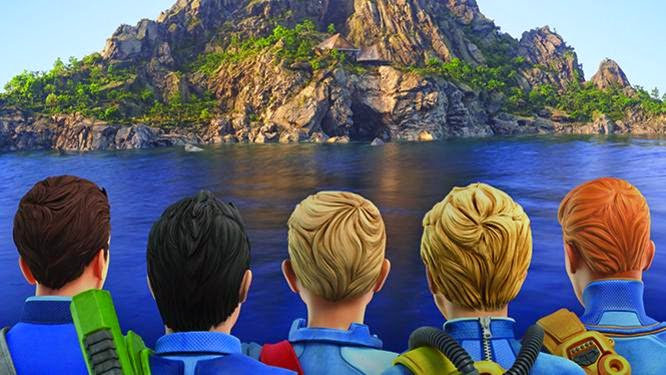 The new Thunderbirds Are Go! trailer serves as a virtual tour of Tracy Island. Weta Workshop (The Lord of the Rings, Avatar, The Hobbit) has lovingly worked on the miniature sets and craft. You can see the recreation area (with its impressive retractable pool), the underground battle station and the surrounding areas.


The upcoming CGI-animation-mixed-with-live-action-miniature-sets TV series serves as a reboot of the 1960s puppet adventure series that marked a generation.

Fifty years after its television debut the iconic series is back in production featuring a talented cast led by Rosamund Pike (The World’s End, Gone Girl) as Lady Penelope and David Graham (Thunderbirds 1965) reprising his role as chauffeur and International Rescue agent Parker. Debuting on ITV in 2015 this re-invention of Gerry and Sylvia Anderson’s much-loved series will be produced using an innovative mix of CGI animation and live-action miniature sets. Unstoppable inventor Brains will be voiced by Kayvan Novak (Fonejacker, Facejacker) whilst Tracy brothers Gordon and John are both played by Thomas Brodie-Sangster (Love Actually, Game of Thrones). Rasmus Hardiker (Saxondale, Lead Balloon) has been cast as both the youngest and oldest Tracy brothers Alan and Scott. The fifth Tracy brother, Virgil, will be played by David Menkin. Tracy Island matriarch Grandma Tracy is voiced by Sandra Dickinson (Amazing World of Gumball, The Hitchhiker’s Guide to the Galaxy) and master villain The Hood played by Andres Williams (M.I. High, Foyle’s War). Plus Thunderbirds Are Go! will feature new characters including Kayo, the Tracy brothers’ friend and fellow island resident, who will be played by Angel Coulby (Merlin, Dancing on the Edge) and Colonel Casey voiced by Adjoa Andoh (Invictus, Doctor Who).

Thunderbirds Are Go! is set to premiere on April 15 on CITV. The new series will boast a score especially composed by Ben and Nick Foster (Doctor Who, Torchwood).
Posted by anim8trix at 12:00 AM