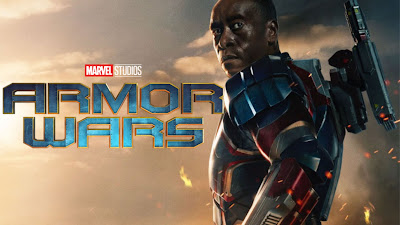 Marvel is famous for secrecy, and the upcoming Disney+ titles are no exception to the rule. The series will focus on Tony Stark’s best friend, James Rhodes, aka War Machine. Don Cheadle is onboard to continue as Rhodey.

Armor Wars Plot
The Armor Wars comics contain seven issues. And the story arc focuses on Tony Stark discovering his Iron Man technology is now in the hands of not just heroes but also villains. Which, of course, leads to chaos. So, of course, his bestie, Rhodey, sets off to recover the items. Disney + confirms the series will be similar and asks, “what happens if Tony Stark’s tech falls into the wrong hands?”

In an interview with BroBible’s Post-Credit Podcast, Cheadle states that Tony Stark’s death “I’m pretty sure, will play a role in the series.” Additionally, like Marvel themselves, he notes that the premise is definitely similar to the comics. However, he adds, “true to the MCU, and true to Marvel’s, sort of, mission, the comic books are a jumping-off point. And then these things have to have their own mythology and their own modus operandi in the way that works. So, to wit, I am not sure exactly what’s going to happen, but I think it’s going to be this intense, kick-ass, Rhodey going around the world thing.”

Behind the Scenes
The Hollywood Reporter reports that comedian and writer Yassir Lester will be the show’s head writer. Cheadle also revealed in the podcast that the writers’ room would open in March/April 2021.

Armor Wars Cast
So far, only Cheadle, who reprises his role as James “Rhodey” Rhodes aka War Machine, is set to star and lead the series.

Armor Wars Release Date
There is currently no release date for the Disney+ series.