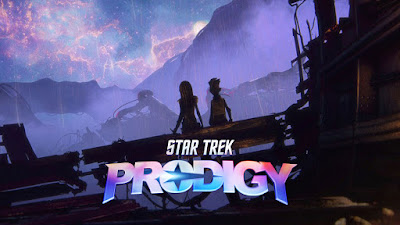 STAR TREK: PRODIGY
New animated Nickelodeon series, Star Trek: Prodigy, which debuted during the Star Trek Universe panel at Comic-Con@Home 2021.
▶ Watch the Teaser Trailer
Star Trek: Prodigy is an upcoming American animated television series created by Kevin and Dan Hageman for the streaming service Paramount+ and the cable channel Nickelodeon. It will launch in 2021 as part of executive producer Alex Kurtzman's expanded Star Trek Universe. Prodigy follows a group of teenagers who use an abandoned starship to search for adventure.
Kate Mulgrew reprises her role as Kathryn Janeway from Star Trek: Voyager. Rylee Alazraqui, Brett Gray, Angus Imrie, Jason Mantzoukas, Ella Purnell, and Dee Bradley Baker also star. Kurtzman first mentioned the series in January 2019, and it was confirmed a month later with the Hageman brothers set as creators and showrunners. Nickelodeon ordered two seasons of Prodigy that April. The series uses computer-generated animation, differing from previous Star Trek animation, and is intended for younger audiences than the rest of the franchise. Ben Hibon was announced as director in August 2020, and in February 2021, it was revealed to be debuting on Paramount+ before airing on Nickelodeon.

Star Trek: Prodigy is set to premiere in 2021 on Paramount+ with the first 10-episode season. It will then air on Nickelodeon before the second season is released on Paramount+.