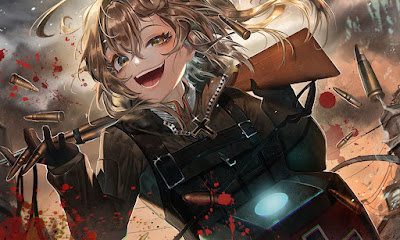 Saga of Tanya the Evil - Season 2
"Saga of Tanya the Evil Season 2 Trailer" has revealed that the "Youjo Senki Season 2" is now currently in production, further adapting deep in Carlo Zen and Shinobu Shinotsuki's original light novel series.
Remember Season One...
In 2013 of modern-era Tokyo, an unnamed atheist Japanese salaryman, in the moment of being murdered by a disgruntled subordinate whom he had fired due to poor performance at work, is confronted by an entity that declares itself to be God who condemns the salaryman for not having 'faith'. The salaryman disbelieves in its existence, criticises its various statements from his perspective as an atheist and mockingly terms it as 'Being X'. The entity decides to reincarnate the salaryman into a world where he would face sufficiently difficult circumstances to turn to Being X for help.

The salaryman is reborn as Tanya Degurechaff, an orphaned girl in an alternate reality's equivalent of Imperial Germany, known as the Empire, in which World War I dragged on into the 1920s. According to Being X, if Tanya either does not die a natural death or refuses to have faith in it, her soul will leave the cycle of reincarnation and will be sent to hell for the countless sins that Tanya has committed in her previous life. In search for an escape, Tanya decides to join the Empire's Mage Corps and fight in the war, hoping to reach a high enough rank as fast as possible to remain far from the battlefield, and in this way avoid the risk of being killed. Even if she's now forced to speak with a young girl's lips, Tanya soon turns into a ruthless soldier who prioritizes efficiency and her own career over anything else, even the lives of those beneath her, especially those that get on her bad side.
▶ Watch the Trailer
Posted by anim8trix at 12:00 AM