Kiyo in Kyoto: From the Maiko House 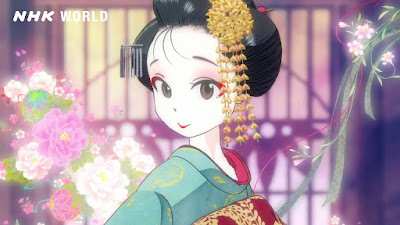 Kiyo in Kyoto: From the Maiko House
▶ Watch the Video
Kiyo in Kyoto: From the Maiko House is a Japanese manga series written and illustrated by Aiko Koyama. It has been serialized in Shogakukan's Weekly Shōnen Sunday magazine since December 2016, with its chapters collected in seventeen tankōbon volumes as of July 2021. An anime television series adaptation by J.C.Staff premiered worldwide in February 2021 on NHK World, and it will be followed by a Japanese broadcast on NHK E in October of the same year. As of March 2020, the manga had 1 million copies in circulation. In 2020, the manga won the 65th Shogakukan Manga Award for the shōnen category.

The story is set in Kyoto's hanamachi geisha quarter. Here, after geisha finish their work late at night, they rest at the lodge to prepare for the next day. The story centers on Kiyo, a teenager Aomori native who works as a cook in the geisha lodge. She also has a friend named Sumire, who is a maiko (apprentice geisha).