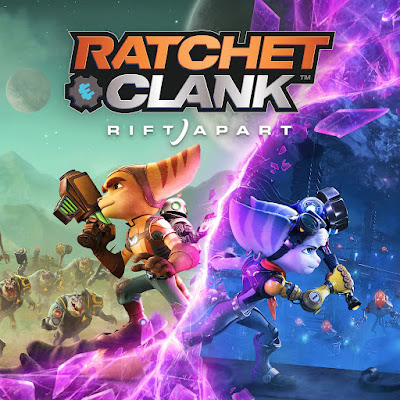 ▶ Watch the CUTSCENE "Movie" in 4K 60 FPS
RATCHET & CLANK: RIFT APART
In light of their previous heroics, Ratchet (James Arnold Taylor) and Clank (David Kaye) are celebrated as galactic heroes. During a parade in their honor, Clank reveals that he has repaired the Dimensionator, a device capable of opening rifts to other dimensions, so that Ratchet can search for the Lombax race and his missing family. However, Doctor Nefarious (Armin Shimerman) suddenly attacks the parade and attempts to steal the Dimensionator, but during the struggle however, Ratchet unthinkingly shoots the Dimensionator, which causes dimensional rifts to begin opening randomly. Ratchet, Clank, and Dr. Nefarious end up being transported to an alternate universe, the Dimensionator then explodes, which damages the fabric of space and time and separates the three. Clank awakens to find himself alone and now damaged from the blast. Clank is then discovered and picked up by a female Lombax named Rivet (Jennifer Hale). Meanwhile, Dr. Nefarious ends up in a throne room, where he is mistaken for Emperor Nefarious (Robin Atkin Downes), an alternate version of Nefarious who, unlike him, has never been defeated in this dimension. Ratchet meanwhile, finds himself alone and starts his search for Clank. With the emperor currently absent on a conquest, Dr. Nefarious secretly assumes his identity and sends his new minions after Ratchet and Rivet.

While searching, Ratchet witnesses Rivet escaping the planet with Clank. Ratchet encounters Phantom (the alternate Skidd), a member of the Resistance opposed to Emperor Nefarious, who gifts him an electronic helper named Glitch to help him get a ship to follow Rivet. Rivet takes Clank to her hideout, where Clank investigates a dimensional anomaly and makes contact with a prophet named Gary, who enlists his help in repairing dimensional anomalies to prevent the Dimensional Cataclysm. Rivet repairs Clank's communicator and he and Rivet are able to contact Ratchet, and come up with a plan to rebuild the Dimensionator so they can return to their own home dimension and stop the Dimensional Cataclysm.

Ratchet heads out to find the blueprint for the Dimensionator, and recruits one of Gary's robot apprentices, Kit (Debra Wilson), to be his partner. Kit warns Ratchet that she is a Warbot built by Emperor Nefarious and she might lose control of her programming and attack him, but Ratchet reassures her that they make a good team. They then head to a secret lab to forge a new Dimensionator. Rivet and Clank head out to gather the Phase Quartz needed to power the Dimensionator, but it is accidentally destroyed. With no other choice, Rivet and Clank search for the mythical Fixer who can repair anything and convince him to overcome his own self doubt to repair the Phase Quartz. Ratchet and Rivet then finally meet, with Clank reuniting with Ratchet and Kit agreeing to become Rivet's partner. They then complete the Dimensionator, only for Dr. Nefarious to arrive to try to steal it. Dr. Nefarious is defeated, but Emperor Nefarious arrives, easily defeating Ratchet and Rivet and stealing the Dimensionator for himself, which he plans to use to eliminate Captain Quantum (the alternate Captain Qwark) and destroy the Resistance once and for all.

▶ How Rivet Lost Her Arm and Got the Robotic Implant
With both dimensions and all of reality saved and the Dimensionator in their possession, Ratchet, Clank, Rivet, and Kit take the opportunity to hang out together, repair the damage Emperor Nefarious caused, and go on additional adventures. In the credits, citizens of Nefarious City begin dismantling the regime's legacy, Dr. Nefarious reunited with Lawrence, who is now a father, and Gary shares his findings with his father, The Plumber.