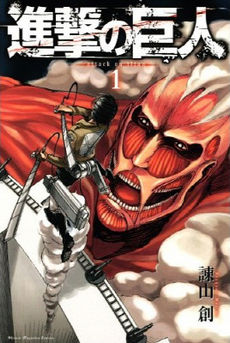 [Source: Wikipedia] Attack on Titan is a Japanese manga series written and illustrated by Hajime Isayama, which is set in a world where the remains of the human population live inside cities surrounded by enormous walls due to the sudden appearance of the Titans, gigantic humanoid creatures who devour humans seemingly without reason. The story centers around the life of Eren Jaeger and his adoptive sister Mikasa Ackerman, whose lives are changed forever after the appearance of a colossal titan brings about the destruction of their home and the death of their mother. An anime television series will debut in 2013. A live action film adaptation will also be released in 2013.
Posted by anim8trix at 12:03 AM