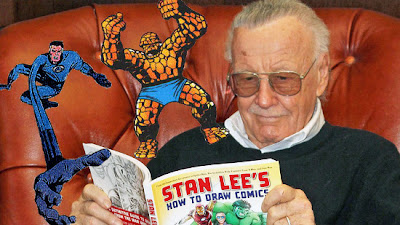 [Source: TulsaWorld] Stan Lee turns 90 today, marking decades of amazing contribution to the comic industry. His characters are mentioned in pop songs, are displayed in every toy store, and have been seen in nearly every facet of American society. He's created some of the most iconic images in pop culture, and nearly anyone you meet can tell you who Captain America, The Hulk or the Avengers are.

Stan's contributions are nothing less than epic, and we're counting the great things Stan Lee did to change the industry.

Marvel comics was struggling to sell issues in the late 1940s and featured a usual 'monster of the week' comic as well as other less inspiring titles. When Stan took over, he came up with the idea of a 'superhero family,' and subsequently created the Fantastic Four. What was unusual about the Fantastic Four was their relationship to one another. They were all scientists, but they had other ties besides simply being NASA professionals. Three of the four were related, and the fourth member, "The Thing," was the archetype for societal outcasts. It was a new spin on the superhero genre which, to that point, had only shown loner superheros with sidekicks.

The Avengers was a culmination of Marvel's top-selling heroes in a 'super brand.' Essentially it was a brilliant idea co-written by Stan Lee and Jack Kirby to take their top-selling individual super heroes and make them a vibrant, cohesive team.

Stan's character creations were excellent feels on the societal pulse of American society. Spider-man was a typical teenager with emerging abilities that made him heroic and dangerous, the Hulk had an anger problem that turned him into a super-powered Dr. Hyde, and Captain America was the idealization of the American way of life. These characters not only functioned as their own entities, but reflect society of the time with the deep issues they tackled.

Stan created the X-Men as the socially outcast superhero team

In keeping with this theme, Stan created the X-Men in 1963. These five teenagers were similar to Spider-man in that they were going through changes and realizing both their potential and danger. However, Stan decided to take it a step further and placed them as the underdogs, where they were continually hated for what they were and considered outcasts instead of heroes. There was a concerted effort in dialogue to reinforce the idea. There was even a throw-away comment by Cyclops who, when he saved a bus of kids, said "They're probably going to say it was Iron Man's repulsor beams that saved them." This set the stage for some great social commentary later on as the team expanded.

When Stan Lee took over, Marvel was struggling with keeping its readers visually interested. Stan hired artist Jack Kirby to reinvigorate the characters and titles. Kirby is widely considered the father of modern comic book storytelling and sequential art. His characters would often jump from the pages and perspective was heavily used as well as classical art composition, which had been widely ignored previously.

Stan has had a knack for knowing who to surround himself with and who to hire to get the best quality of work possible for the project. Kirby was just one of the many people Stan hired to bring his ideas and titles to life and capture the imagination of entire generations.

Stan Lee has had one of the greatest impacts on our generation, and he shows no signs of stopping.

We raise a glass of Romulan Ale (Asgardian beer as well) to you, sir.

And just for fun, here's a clips reel of all the cameos Stan has made in comic book movies. Much like the man himself, it's pretty incredible.
Posted by anim8trix at 12:30 AM