"Even People with Adolescent Delusions of Grandeur
Want To Experience Love!"


also known as "Chu-2" for short
Yūta Togashi is a boy who, during junior high school, had 'adolescent delusions' (lit. "junior high school second grade illness"), believing that he possesses supernatural powers and dubbing himself the 'Dark Flame Master,' therefore alienating himself from his classmates. Finding his past embarrassing, Yūta attempts to start off high school where he does not know anyone, free from his old delusions. This proves to be difficult, however, as a delusional girl in his class, Rikka Takanashi, learns of Yūta's past and becomes interested in him. As the plot progreses Rikka becomes more attached to Yūta, who despite finding her delusions irritating and embarrassing, accepts her. He helps Rikka with a number of things, including founding and maintaining her club and tutoring her. When he joins her on her summer vacation, Yūta learns that when Rikka was very young her father, whom she was very close to, died unexpectedly due to a terminal illness, causing her to fall into her delusions. After Yūta agrees to help Rikka search for the 'eternal horizon' (which she believes will lead her to her father) she becomes romantically interested in him and vice versa. 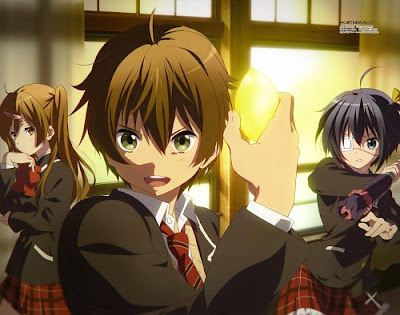