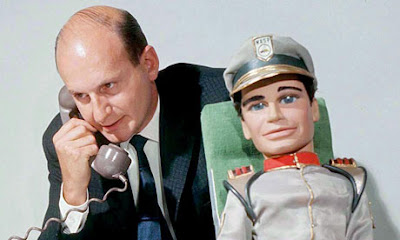 Gerry Anderson With Troy Tempest From '' Stingray'' in 1966 Photograph: R.G. Balkham/Rex Features
[Source: Guardian.uk] Gerry Anderson, best known as the creator of Thunderbirds, has died at the age of 83. The film and television producer, whose credits also included the puppet shows Captain Scarlet and Joe 90 had suffered for several years with mixed dementia and died in his sleep, his son announced on Wednesday.


The news was announced on his son Jamie Anderson's website. He wrote: "I'm very sad to announce the death of my father, Thunderbirds creator, Gerry Anderson. He died peacefully in his sleep at midday today (26th December 2013), having suffered with mixed dementia for the past few years. He was 83."

He requested that any fans wishing to make donations in honour of his father should contribute to the Alzheimer's Society.

His website also included a tribute written by his fan club, known as Fanderson. Nick Williams, chairman of the club, said: "To those who met him Gerry was a quiet, unassuming but determined man. His desire to make the best films he could drove him and his talented teams to innovate, take risks, and do everything necessary to produce quite inspirational works. Gerry's legacy is that he inspired so many people and continues to bring so much joy to so many millions of people around the world."

Gerald Alexander Anderson – famous for the use of "Supermarionation", or the use of modified puppets – was born in 1929 in Hampstead, north London, and began his career as a film trainee at the Ministry of Information before starting work at Gainsborough Pictures. He later set up AP Films with some friends.

With commissions thin on the ground Anderson and his team were eager to produce their first puppet show The Adventures Of Twizzle. Others including Torchy The Battery Boy, and Supercar followed. Success continued with Fireball XL5 and Stingray. But it was Thunderbirds, filmed on the Slough Trading Estate in Berkshire and first broadcast in 1965 that made his name. With the catchphrase "Thunderbirds are go!", the programme revolved around International Rescue, a secret emergency service run by the Tracy family aided by London agent Lady Penelope and her butler, Parker.

Anderson moved towards live action productions in the 1970s, producing Space: 1999. In the 1980s, a burst of nostalgia for his Supermarionation series led to the commission of new productions, including a remake of Captain Scarlet. New Captain Scarlet, a CGI-animated reimagining of the 1967 series, premiered on ITV in the UK in 2005. He also worked as a consultant on a Hollywood remake of his 1969 series UFO, directed by Matthew Gratzner.

Anderson was a one-of-a kind film and television producer, who had far-reaching influence, according to his fan club dedication. "Anderson's unique style of filmmaking influenced the imaginations and careers of countless creatives that succeeded him, and his productions continue to be shown around the world to new generations of fans," it read.

Television presenter Jonathan Ross praised his work, tweeting:
"Sad news. Gerry Anderson RIP. For men of my age his work made childhood an incredible place to be."

The producer was diagnosed with mixed dementia two years ago and his condition had deteriorated over the past six months and he had moved into a care home in October. He also worked as an ambassador for The Alzheimer's Society, to raise awareness and money for the treatment of the disease. Gerry Anderson leaves three children from former marriages, Joy, Linda and Gerry Junior, his son Jamie and widow Mary. 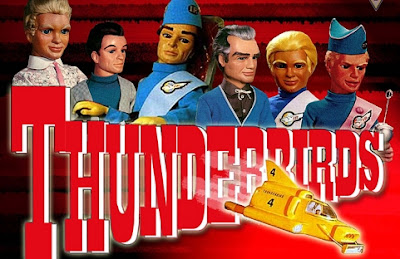 THUNDERBIRDS 2086
Not a Gerry Anderson production, but instead an anime interpretation
of the original Thunderbirds set in the (further) far future.
Classic anime and a great reinvention.
Posted by anim8trix at 12:30 AM