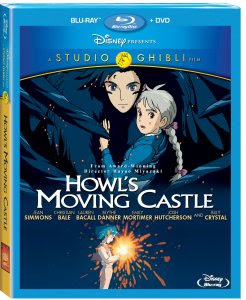 
The fantastic new Blu-ray Combo Pack release lets “Howl’s Moving Castle” soar like never before with a breathtaking new HD digital transfer of the fantastic animated adventure that celebrates the power of love and the resiliency of the human spirit in the face of adversity.

Brimming with a blend of imagination, humor, action and romance, “Howl’s Moving Castle” is the story of Sophie (voiced by Emily Mortimer), a diligent teenage girl working in her family’s hat shop, who finds her life thrown into turmoil when she is literally swept off her feet by a handsome-but-mysterious wizard named Howl (voiced by Christian Bale). The innocent encounter engages the vain and conniving “Witch of the Waste” (voiced by Lauren Bacall), who transforms Sophie into a 90-year old woman (voiced by Jean Simmons). Sophie’s efforts to break the curse bring her to Howl’s magical moving castle, where she befriends Markl (voiced by Josh Hutcherson), Howl’s apprentice, and the hot-headed fire demon Calcifer (voiced by Billy Crystal). Her love and support have a major impact on Howl, who can be maddeningly self-indulgent and singularly noble as he defies royal orders to participate in a meaningless war and risks his life to protect Sophie.


Rating: PG in U.S. and Canada
Bonus Material not rated