“My Neighbor Totoro” on Blu-ray 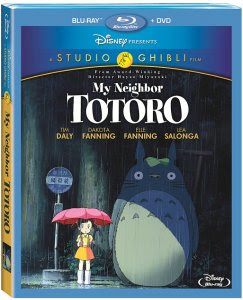 Disney proudly celebrates the 25th anniversary of “My Neighbor Totoro,” the acclaimed Studio Ghibli film about the magic of friendship and sisterhood from Academy Award®-winning director Hayao Miyazaki (Best Animated Feature, 2002, ”Spirited Away”) – with the film’s Blu-ray debut on May 21, 2013.

Lauded as “one of the most beloved of all family films” by critic Roger Ebert, “My Neighbor Totoro” is the heartwarming story of sisters Satsuki (voiced by Dakota Fanning) and Mei (voiced by Elle Fanning). Much to their delight, when Satsuki and her four-year-old sister Mei move into a new home in the countryside, they discover that their new neighbor is a mysterious forest spirit called Totoro—who can be seen only through the eyes of children. Totoro introduces them to extraordinary characters—including a catbus—and takes them on an incredible journey.