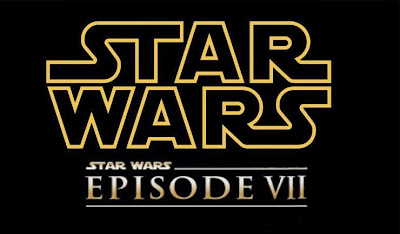 [Source: blastr.com] There is now, for the first time, photographic evidence of work being done on Star Wars: Episode VII.

We still know very little about the next installment in George Lucas' space-opera franchise. We know that it's set after Return of the Jedi. We know that director J.J. Abrams is now co-writing it with Empire Strikes Back scribe Lawrence Kasdan. We know that Mark Hamill, Carrie Fisher and Harrison Ford are all (hopefully, probably) returning for more adventures. And we know that the release date has been shifted from May 2015 to December 2015. The rest is just casting rumors and lots and lots of that legendary J.J. Abrams secrecy.

But even Abrams isn't afraid to tease us now and then with a little bit of Star Wars fun. He may have teased us with a stack of Star Wars screenplays a few months back, but now he's definitely giving us a taste of a long time ago in a galaxy far, far away. Here's the latest from the official Twitter account of Abrams' Bad Robot production company. 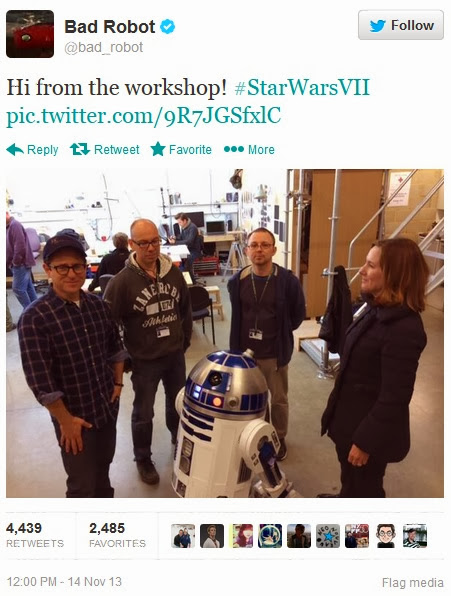 That's Abrams on the far left, Star Wars producer Kathleen Kennedy on the far right, and in the middle a certain droid you just might recognize, all surrounded by what at least looks like production progress.

Star Wars: Episode VII is scheduled to start shooting early next year, so it's no surprise Abrams is getting acquainted with the universe on a very up-close level. It's also no surprise that the photo seems to be hinting that R2-D2 will show up in Episode VII, since he's one of the select few characters who've spanned the whole saga so far.

Hey, it's not much, but considering how little we've gotten lately in the way of concrete Star Wars movie details, we'll take it.
Posted by anim8trix at 12:00 AM