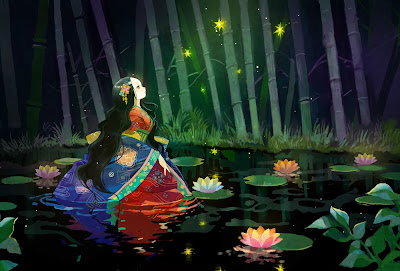 [Source: AnimeNewsNetwork] The famous Japanese folktale Taketori Monogatari (The Tale of the Bamboo Cutter) centers on princess named Kaguya who was discovered as a baby inside the stalk of a glowing bamboo plant. Taketori Monogatari has inspired dozens of manga and anime stories, such as Reiko Shimizu's Kaguya Hime and Arina Tanemura's Sakura-Hime Kaden.

Aki Asakura will lead the cast as Kaguya, and Takeo Chii, who passed away in June of last year, will still play the role of Okina (Old Man), as he had recorded his part before his death. Kengo Kora and Nobuko Miyamoto round out the main cast as as Sutemaru and Ouna (Old Woman), respectively. Other cast members include Atsuko Takahata, Tomoko Tabata, Tatekawa Shinosuke, Takaya Kamikawa, Hikaru Ijūin, Ryudo Uzaki, Nakamura Shichinosuke, Isao Hashizume, Yukiji Asaoka, and Tatsuya Nakadai.

Takahata (Grave of the Fireflies, Only Yesterday, Pom Poko) revealed in 2009 that his next film will be based on the folktale. The tagline for the film reads, "A princess's crime and punishment."

Joe Hisaishi (Spirited Away, Princess Mononoke) is composing the film's soundtrack. Takahata conceived the story and co-wrote the screenplay with Riko Sakaguchi. This will be Takahata's first film since My Neighbors the Yamadas about 14 years ago.
The film will open in Japan on November 23.
Posted by anim8trix at 12:00 AM