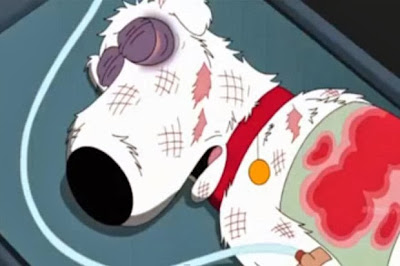 [Source: Yahoo!News] Brian Griffin, a white Labrador who had lived with the Griffins on "Family Guy" for 11 years, died on Sunday in front of the Griffin home on Spooner Street. He was 8. Or 56 in people years.

The cause of death was runoverness, sparked by a hit-and-run accident while Brian and mad genius toddler pal Stewie were preparing to play street hockey in front of their Quahog home.

Brian, whose shocking death (it's a comedy, Seth MacFarlane!) appears to be a permanent storyline change, has already been replaced in the Griffin clan by Vinnie, a tough-talkin' pooch the Griffins purchased at a pet store. Italian-American Vinnie, like Brian, also talks, and bears a striking resemblance to a New Jersey gangster (he’s being voiced by "Sopranos" alum Tony Sirico).

"This was an idea that got pitched in the writers' room, and it sort of caught fire, and we thought it could be a fun way to shake things up," showrunner Steve Callaghan told E! Online. "As soon as this idea came up, we started talking about what the next couple episodes could be, and we got very excited about the way this change will affect the family dynamics and the characters."
Brian, who was voiced by series creator MacFarlane, was a prolific dog who wrote novels; directed porn movies; spoke Spanish, French, and Tagalog; and was a member of MENSA. He was an Iraq War veteran and one-time police dog, served with the Peace Corps, and was a colorful character who enjoyed women, wine (or rather, a perfectly-concocted dry martini), and the occasional recreational refreshment (OK, he was a recovering coke addict).

He and Stewie shared many adventures, including a penchant for time travel, thanks to Stewie's DIY time-travel machine. In fact, it was the destruction of the machine in Sunday’s episode, "Life of Brian," that spelled doom for the family pet. Optimistic fans of Brian and "Family Guy" hold out hope that the canine could make a comeback at some point in the future, if Stewie ever gets the part to recreate the machine. And because, you know, this is a cartoon.

The lovable, Brown University-educated Brian, born to father Biscuit and mother Coco, did have the chance to say goodbye to his family, telling them, "You've given me a wonderful life. I love you all."

Damn you, vile dramatic development that made us cry during a cartoon!

Viewers of the show also expressed their sadness, disbelief, and anger at the death of a character who was certainly among the series’ favorites: 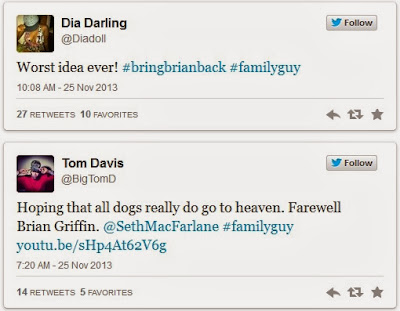 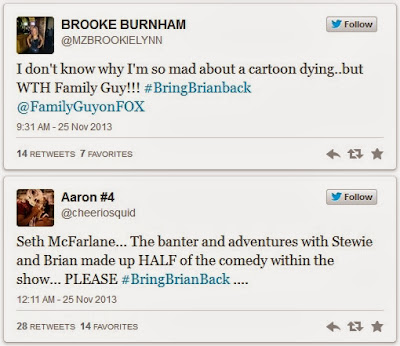 ‪
In fact, irate fans have already launched an online petition aimed at bringing their favorite cartoon pooch back from the dead.

Callaghan, who has been with "Family Guy" since its debut in 1999 and was a member of the show's original writing staff, told E! Online he is not worried about backlash from "Family Guy" devotees who are mourning Brian.

"Only because our fans are smart enough and have been loyal to our show for long enough, to know that they can trust us," he said. "We always make choices that always work to the greatest benefit of the series."