"Short Peace" to Run in US Starting March 3 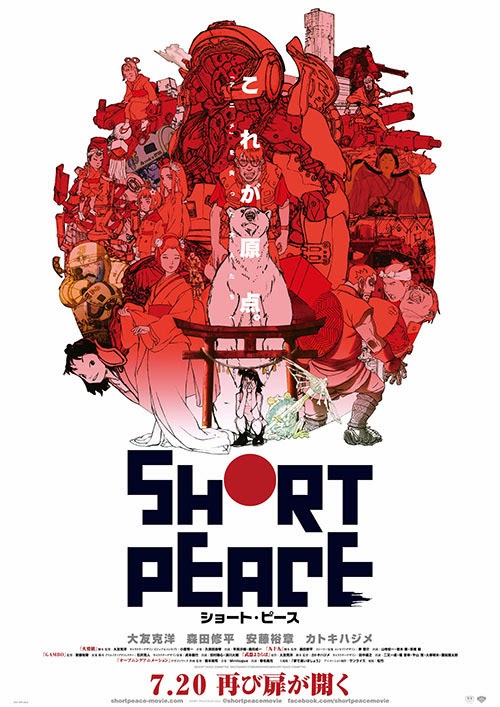 Eleven Arts and Sentai Filmworks will be bringing the “Short Peace” anime anthology to U.S. movie theaters starting on March 3, 2014. The anthology of four short films will include Shuhei Morita’s Oscar-nominated short film “Possessions,” along with Otomo’s “Combustible,” Hiroaki Ando’s “Gambo,” and Hajime Katoki’s “A Farewell to Arms.” As of press time, the anthology will screen at theaters in California, Hawaii, New Jersey, New York, Texas, and Virginia. [Source: ElevenArts]

Synopsis
In 1995, Katsuhiro Otomo’s epic anthology MEMORIES showcased the work of upcoming superstars of the anime world. Now, Otomo’s spotlight shifts to a fresh generation of master creators with an all-new anthology of visionary films: A lone traveler is confronted by unusual spirits in an abandoned shrine in the 2013 Academy Award® nominated POSSESSIONS (TSUKUMO), directed by Shuhei Morita (COICENT, KAKURENBO). A mysterious white bear defends the royal family from the predations of a red demon in the brutal GAMBO, directed by Hiroaki Ando (FIVE NUMBERS!) from REDLINE’s Katsuhito Ishii’s original story with character designs by Yoshiyuki Sadamoto (NEON GENESIS EVANGELION). The focus shifts from supernatural to science fiction for the action packed A FAREWELL TO ARMS (BUKI YO SARABA), as MOBILE SUIT GUNDAM designer Hajime Katoki helms Otomo’s tour-de-force saga of men battling robotic tanks in apocalyptic Tokyo, while grandmaster Otomo himself assumes the directorial reigns for a spectacular tale of love, honor and firefighting in ancient Japan with the multi-award winning COMBUSTIBLE (HI-NO-YOUJIN). Prepare your senses for the animated films that are taking the critical world by storm as a new era in anime is ushered in with Katsuhiro Otomo’s SHORT PEACE!